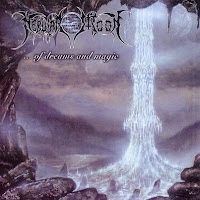 Much like a religious fanatic who starts speaking in tongues, I find myself becoming possessed whenever I have the hint of some metal band in my brain whose material I've owned or listened to before, but that I suddenly can't remember in name. I think I've heard so many tens of thousands of records in this genre over these last four decades that I've started to develop gaps in the gray matter, and I often find myself paralyzed until I can figure it out. Praise be to the INTERNET, for all its social media horrors and other negatives, that it can be a useful aide for my particular condition. It was the sophomore album of Germany's Nebular Moon during my latest episode, which I remember acquiring at a local import shop along with a whole pile of Century Media, Invasion Records, Head Not Found, No Fashion and Last Episode releases. Four of those labels are now apparently defunct, have been for some time, and I find that truly saddening, since they were such reliable hosts to a lot of lesser known but worthwhile black and melodic death metal bands developing over that decade.

Perhaps Nebular Moon were not among the most inspiring or distinct of those rosters, but since my mind went through the somersaults of remembering this record I figure I'd damn well write about it so that its existence sticks with me forevermore, since its music obviously doesn't. I feel that I've never entirely explored the German scene, so prolific from that point until now in the black metal medium (as with others), but I don't know that this quintet ever really stood out among it. What we have here is basic, competent black and death metal, probably leaning more to the former, often played slowly and miserably in melodic doom territory, and then dowsed in synthesizers which accordingly provide for most of the emotion and atmosphere that wells up over its 40 minute run-time. That's not to say that there aren't a decent variety of riffs being played, but I found a lot of them pretty limp and uninteresting, switching between stock chord progressions that underlie the synthesizers, tinnier melodic lines, and some tremolo picked sequences which don't really conjure up the hellish-ness the album could use. The vocals are a crude snarl, often accented with some guttural backups, solemn choirs, screams and others which seem bent upon giving the album a more Gothic/black metal appeal which it never quite achieves. The drums are alright but they're not given a hell of a lot of great music to play along with so they are reduced to mere functionality.

I don't want to be a complete downer on this one, because there are a few points, like in the songs "Schwanengesang", "Awakening in Black Thorns", or "Beyond the Sky" where I'd occasionally get swept into what they were doing, largely because I have a soft spot for this style when its played well, or played at all. Considering how much atmospheric black metal would continue to (and still continues) to take off these days, it seems like ...of Dreams and Magic is just one of those many albums that a handful of the style's practitioners might have heard and taken a small amount of collective inspiration from. When it all hits its stride, and you have those decrepit rasps alongside a shimmering synth line and a decent guitar pattern, and then it all erupts into a black metal charge, I do feel a little of ye olde excitement. I also love the cover artwork, the band's logo, and the general mood of what they were attempting, but they really only pull it off for about half the album. The lyrics are a bit of a mixed bag of laughable Gothic metal stereotypes: 'I desire her body, which is fine like a lotus bloom'. 'And the voice of silence started to cry', 'My skin awaits your aching kiss on my neck'. By laughable I mean borderline hilarious, but during the age in question I suppose they were pretty standard attempts at the whole Cradle of Filth shtick.