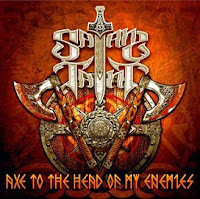 Gotta be honest...I don't know what Satan has to do with Vikings, so the name itself of former Overkill guitarist Bobby Gustafson's solo project already bears a bit of incongruence with the title font, symbology and lyrics that adorn it. This was excusable back in the day, I mean 'Elizabeth Bathory' doesn't have much to do with the Vikings either but I was 100% okay when Quorthon went down that path in the late 80s. I suppose we could assume that 'Satans Taint' could be a Christian perspective on what fueled their Scandinavian assailants, so I'm willing to look past it, but then I become distracted again because I don't know if the 'Taint' refers to the influence upon their black hearts or the devil's package. It all matters little to the musical content, just throwing it out there that it was a bit off-putting right up front, and I'm probably also being a bit of a dick...and maybe not for the last time as I cover these solo efforts.

Axe to the Head of My Enemies starts off quite well, with some deep synthesized choirs brooding over some melodies before Bobby's trademark thrashing begins. You can definitely trace a line from his work in Overkill straight to how some of these songs are composed, as they often riff back and forth between mid-paced neck jerking rhythms and faster charges, reminiscent of a meatier version of those 80s albums he participated on like Under the Influence or The Years of Decay. The guitars are heavily distorted to really churn out a mosh-worthy thrash tone, but still pretty clear, even a bit of a clinical feel to them when he breaks out into some more melodic note progressions that reminded me of groups like Germany's Paradox in a few spots. Vocally, his two guests use a pretty harsh style, nasty and quite good for the style, which they round out with some growling, often full-bodied like a Chuck Billy as they bark out the chorus to the opener "Asatru". In other areas like "Killing Spree" you can tell they're going for a Bobby Blitz like formula where you've got a heightened, energetic series of lines that stand out with that same frenzied energy, although they're obviously not nearly as striking as his former singer. All in all, I'd say the vocals are handled well enough considering their disparate styles.

But then the album sort of shits the bed with another Overkill parallel, the groove metal of "He Who Wore the Crown" which is similar to the slower, Sabbath-like material his alma mater also started to explore right around the time Bobby exited that band. I guess if you really enjoy banal bluesy metal in the vein of Black Label Society this might interest you, but I find it dull as a board, with no new twists on the riffing to make it memorable. The vocals do still sound solid, but Satans Taint is no Trouble, I'm a' leave it there. Unfortunately this kind of swagger infects a little bit more of the taint than I'd have liked. "Gothic Serpent", where he channels Solitude Aeternus and Candlemass, is actually a decent tune. He also dips his mead horn into the death metal realm a little in "Gutpile" and "Battle of Bravalla", where the guitar tone sounds good, and there's nothing necessarily wrong, but it further dilutes the focus of the album, almost like Gustafson is just trying his hand at a number of styles to see what sticks. He's not at all 'bad' at any of them, but there are some really weak, boring tracks here like "All Out War" which feel like dumb tough guy death/thrash metal, predictable chugging riffs, and they sort of diminish their neighbors. There are a few guests loaning lead guitars here, including James Murphy, but most of them are forgettable.

I think there was probably a decent EP of consistent material here..."Asatru", "Battle of Bravalla", the instrumental and "The Hammer of the Cross" which could have thrived as more of a thrash variation on the Amon Amarth 'Vikings for Beginners' aesthetic; and also I thought "Gothic Serpent" was a good avenue to explore, but I don't think this debut quite gelled for me overall. It's an independent release, so it's quite likely this was a feeler to gauge reactions before settling on a more particular sound, but I'm not not hearing a lot of memorable content beyond its mere competence. Axe to the Head of My Enemies seems a little half-formed, but not lacking for some professionalism.