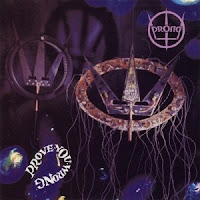 Prove You Wrong is one of those really unique records of that early 90s period which I didn't take to at first, apart from a couple tracks, but later started to grow on me (like Kreator's Renewal), to the extent that now I put it on almost the same level as Beg to Differ, which was an album that a lot more thrashers I know paid attention to. I encountered a nearly unanimous disregard or disappointment towards this one composed to the two albums sandwiching it, probably because the sophomore was their big label debut right, in before the thrash genre started to wane, and Cleansing was carried on the success of "Snap Your Fingers, Snap Your Neck". At any rate, this one actually sounds better to me now then when I first heard it, so whatever production choices were made have really stood the test of time, whereas Beg to Differ does seem a little less potent mix-wise than I remembered in my youth, not that it really dulls the music, but Prove You Wrong is louder, bolder, and more organic.

This is also a very transitional record, with feelers to both the band's thrash past, and the industrial, alternative and groove metal that would dominate the remainder of their 90s output. Hell, even the cover here, with its great sculptures of the band's iconography, reminded me a lot of what a lot of alt rock/Lollapalooza types were using back in these days. Troy Gregory of Flotsam & Jetsam stepped in to replace the departing Mike Kirkland, and while it might not be a prevailing opinion, I thought Troy's tone here hit a little harder...the bass lines were always fairly thick, but here they're quite corpulent and it stands out more. In fact, the production on the bass is one of my favorite elements to this one, it's perfect. The drums and some of the rhythm guitar riffing patterns here aren't a far cry from Beg to Differ, with a focus on very simplistic, memorable, mechanical progressions. There is no lacking for energy, with the opening volley of the tribal, pounding "Irrelevant Thoughts" and the more traditional thrashing of the excellent "Unconditional". Victor was continuing to grow more confident in his vocal abilities, so the slightly higher pitched lines from the prior album were growing even more developed and melodic when he'd hit a chorus here, and his presence is pretty seamless whether the trio was thrashing out hard or experimenting more with the title track, which has almost as much in common with a band like Primus as Prong.

As great as "Unconditional" is, most of my favorites on this one come in the middle; "Hell If I Could" with its eerie, dissonant verse riffing and fat bass lines during the choppy chorus; and "Torn Between" with that amazing groove riff. "Brainwave" is another highly, one of the more taut thrashing bits and one that might have fit the most with the material off the first two full-lengths. The later chunk of the album remains solid but it doesn't quite live up to some of the material before it, despite their honest attempt at a cover of The Stranglers' "Get a Grip (On Yourself)". There are no bad tracks, but had it ended with "Brainwave" or the instrumental "Territorial Rites" it would feel more consistent overall, and this is why I hold a fraction below Beg to Differ even though there are aspects of this disc that are much stronger. I have to say I find this underrated, I know I've seen people complain that it was too groovy, almost a proto form of nu-metal in places, or that the album feels rushed, but apart from 7-8 minutes of bloat I just can't agree with that. It's another unique, forward-thinking effort. Prong could have written a grunge album or started crossing over into death metal like a lot of other thrash bands of the era, but instead did something altogether different, and this wasn't at all the last time.