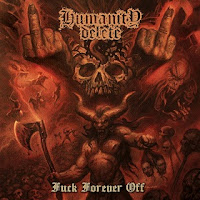 I'm assuming that Rogga Johansson initially intended his dozens of death metal projects to mirror certain individual traits of the many influences in the genre he was weaned on, but the problem with having such a prolific body of work is that the sounds of these bands all tend to bleed into one another to the degree that they become entirely indistinct. As the years continue to roll by, and his catalog becomes deeper still, this grows even more tedious. If you had plunked Fuck Forever Off down in front of me and told me it was the latest Paganizer, or Megascavenger, Revolting, or Ribspreader, I might not know the difference without the actual logo staring at me. Surely there are a few microscopic variations, in both production and composition, but largely any changes come with what personnel he's lined up to work with.

For Humanity Delete, one of his true solo projects, there really aren't any...it's just Rogga alone doing what he's done many times before, and while that's often been good enough, here it just isn't anything of interest. This particular outlet started out with more of a death/grind sound, as I can recall from the middling debut Never Ending Nightmares in 2012, but much as Bolt Thrower evolved from that style, so too does Humanity Delete. The sound manifesting here is more of a straight to the face, slower and groovier variety of death metal which to me felt like a mix of early Grave, Dismember and Bolt Thrower. Spongy, thick Swedish tone, lots of chugging, some grooves, perhaps even some of the death & roll influence his countrymen pioneered. Leads happen at appropriate times but are largely ineffectual. The vocal style is a very dull guttural which is near impossible to distinguish from so many other efforts he's been a part of, and the rhythm section is adequate, with potent drums and bass that sounds thick but usually doesn't deviate too far from what the rhythm guitar track is playing. I think the production is overall well handled, it does give a modicum of depth and atmosphere to the material despite its blandness.

Don't mistake that I think Fuck Forever Off is in anyway incompetent, it's just painfully average. I actually look up to Rogga a lot, it takes some serious dedication to constantly produce albums like this one, this man loves this genre as much or more than any other individual on our planet, and he's got plenty that I'll still break out from time to time. But I don't think I could count more than three riffs on this entire 31 minute experience that I had any real desire to listen through more than once. Tone and style are 100% legit, but the music is just uninspiring whether it's plodding along on tank tracks or breaking out into a faster progression. The Joe Petagno artwork is cool, and as usual Rogga has a bunch of cool song titles like "Lairhunter", "The Hatchet Cleaves the Night" and "Flesh Panzer", but the music simply doesn't do much to evoke the concepts into something that will really fire up your imagination like the early death metal acts that this one venerates did in the 80s and 90s.