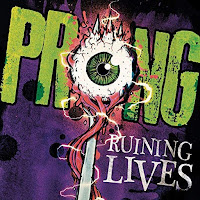 The ground Prong gained with their 2012 'return to form' Carved in Stone was theirs to lose, and while Ruining Lives doesn't quite reach the same heights as its predecessor, it follows its example pretty closely, but actually intensifies the formula with some even more charged up aggression and speed. That doesn't translate into better songs, necessarily, but the audience would at least be snapping its fingers and necks throughout the majority of its 42 minute barrage. The eye impaled on the fork might have returned, but don't expect any return to the more industrialized, laid back grooves of the mid 90s Cleansing era, this is through and through a thrasher with just a few more of those catchy rock-oriented chorus parts here, but it by no means leans on them as much as the heaviness.

The lineup was stabilized from the prior effort, but there are a few production differences, for instance this one has a more caustic sound to the guitars which makes it hit a lot harder, perhaps a small nod back to the days of Force Fed, but nowhere near as brash, raw and atmospheric. The playing is dextrous and intense, the leads come flying at you like birds of prey crashing to the earth to snatch something up in their talons. Victor's guitars sound like he had somehow reversed his aging process, or maybe just showing us that he wasn't always lighting up the frets and whipping the hair around as he always could have been. This does occasion get Prong lost in the shuffle of other, more rapid fire thrash bands sprouting up at the time, but there's still enough here that sounds distinctly like this band that you they never scratch their identity. A few of the harder hitting, double bass driven progressions can be a little predictable, and this album has a higher ratio of forgettable riff patterns than the one before it, to the point that a lot of the tracks that relied heavier on breaks with the bass guitars ("Absence of Light") automatically sink their hooks in more because it stands out from the more exhausting heaviness around it.

There's still a degree of nuance and creativity happening where it can, and the vocals carve straight through you. In this particular mix they almost sound more futuristic, especially when he's layering down some backing tracks for himself, the limited melodic dynamics he spits out are very effective against the brickwork of the drums and rhythm guitars. I do think Campos got drowned out a bit here, you can hear the presence of the bass but it's just not competing at the level needed against these guitars, and seems like it just shadows them too much, except on a track like "Self Will Not Riot" where they get a little bit funkier and pop out more. Not a ton of tracks on this one that I ever find myself whistling when not in the presence of the album itself, but I found "Remove, Separate Self", "The Book of Life" and the others I mentioned in the review to be its strongest, and then of the rest you're at least getting some genuine fury like the opening combo of "Turnover" and "The Barriers". Not Prong's finest hour, perhaps, but still a damn sight better than Scorpio Rising, and at least it gave me confidence that Carved in Stone wasn't some late-stage positive fluke in their career.