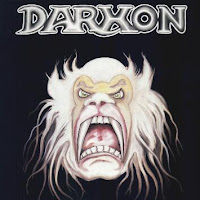 An album like Killed in Action is always an interesting one to approach because it's a veritable dead end...a black hole on the heavy metal landscape. Sure, the Germans would go on to produce another couple albums and an EP, and various members through its  active years would move on to other groups like Bonfire or U.D.O., but you just never hear anyone talking about Darxon at all. Heck, I've even had conversations specifically about unknown Teutonic traditional metal of the 80s and this group wasn't brought up. After spinning the album for myself, I think it's reasonable, as these guys were certainly not achieving anything that wasn't already available in spades by the middle of the decade in which it was released, just total straightforward heavy metal, molded almost entirely from its influences without a ton of personality of its own. I don't even know where the name came from, it sounds like some 8-bit import arcade shoot 'em up from Japan, or some generic evil wizard from a failed fantasy novel around the same era.

But none of that is to say Killed in Action is all that bad for an obscure debut. It gets the job done as long as you're expectations are little more than a standard set of energetic, rocking riffs that carefully straddle the border between cheesy hair metal and bad ass street chops. Vocalist Massimo de Matteis, who was with the group through all their recorded output (as far as I can tell), had a mildly distinct voice which felt like a fusion between the Scorpions' Klaus Meine and some of David Coverdale's higher pitched, emotive crooning, with a bit of an earlier Biff Byford Saxon attitude. Lots of blues in his intonations, not without some flaws but definitely putting some effort in. The guitars are super basic amalgamations of 70s Judas Priest, some Accept and maybe even a little old Van Halen for good measure, but almost unanimously lacking in the catchy department unless you're a true die hard who simply finds comfort and enjoyment out of this style. Admittedly, I do sometimes fall into that category...as much as I hoo and ha about progression and uniqueness, I've still got a steel heart for this sort of thing and did not much mind my listens through the record so that I could talk about it.

Rhythm-wise, there's not much to brag about the merely adequate bass lines and beats, they don't generate a lot of power other than keeping time and filling out the bottom end of the mix just enough so that you'll notice it's all happening. The leads on the album are also pretty barebones and not quite different than what you'd find on a lot of throwaway glam metal albums around the same time. I did notice that whenever Darxon tried to get heavier, or a little faster, they seemed like they could have been more exciting, for instance the closer "Stormbringer" with its vintage Saxon vibe; but then the band always seemed to check itself and ensure that what they were playing was fairly inoffensive, standard fare that might make it onto the radio. I'll give a few extra points for having tracks called "Simile of Evil" and "Holy Macho" (what?!?), and some sort of Yeti or Wendigo thing scowling at me from the cover, but Killed in Action is appreciably average by every sort of metric I can apply to it. That said, if you DO scour the backwaters of metal history for low-rent heavy metal I don't think this would take a piss in your ears, it's at least got the fundamentals down. I don't know if this is around in any official format today, it was released several times on vinyl but other than that you might need to grab a download or a bootleg.