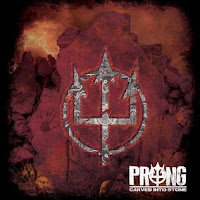 After 16 years of nothing consequential happening, I admit I had pretty much discounted Prong from ever mattering to me again. I could always enjoy the first decade of material they released and ignore the rest, but Tommy Victor and his latest round of recruits Alexei Rodriguez and Tony Campos had other plans, recording and releasing their best material in all those years. Carved Into Stone is partly a return to the energized thrash roots of Force Fed, but it brings along all the lessons the band learned after that in terms of production, and also some of the post-hardcore and groove metal influences, though the industrialized phase of the band had largely been phased out by this point (not entirely, see below). This record might not have all of their catchiest or best written tracks, but damn if it isn't a consistent and effective affirmation of most of the band's strengths leading up to it, and as far as I'm concerned this remains the band's benchmark for the 21st century; the formula they've been trying to maintain ever since.

Kicking off with what is arguably the band's purest thrash joint since 1990, "Eternal Heat", the trio plays in total lockstep, furious clips of Victor's thrashing guitars emphasized heavily by the drums and low end of the bass to create a flailing, punching entity that is easy to get excited about. As far as riff construction, there are tons of callbacks here to progressions from Beg to Differ, Cleansing and Prove You Wrong, even if they're not complete copies. Sticking with what's safe, perhaps, but doing so with a fury. Tommy's vocals sound so much better on this album than the two before it that it's almost like he had emerged from some sort of rehab. A lot of that has to do with the production, which sounds great with the backing tracks, and while even his melodic side retains that urban toughness you'd expect, it's the best he's sounded. You still get some of the grunting chorus parts, but they sound a lot more controlled and complementary to the music than they did on the unfortunate Scorpio Rising. The leads are also more energized and memorable here than on nearly anything else they'd ever come up with, and the whole affair is pure professionalism, and not at all to the detriment of the level of aggression they're meting out.

Also vital to the album is that they keep a lot of the very catchy choruses with the melodic chord patterns and slightly cleaner, more emotional vocals, "Revenge...Best Served Cold" being one that comes right to mind, a tune that would have fit right in on any of their 1991-1996 material. "State of Rebellion" is another highlight, and this one's one of the scarce love letters to their industrial side with those pumping bass lines in the verses and the creepy, shrill electronics in the background that make it sound like you're trying to solve a Scooby Doo mystery from the middle of a mosh pit. I can't even think of a truly weak tune on the album...even "Subtract" with its bland verse groove riffs is accented by a great chorus and skillful vocal delivery. The lyrics are quite good, some of the best they've had through their career, and even the cover art, while still staying simple, is at least less of an eyesore than the couple albums before it. I was thoroughly satisfied with this album when it showed up, and still break it out for regular rotations almost as often as I do the first five.