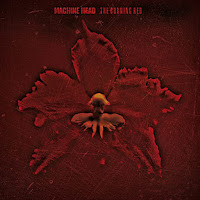 I don't know what could possibly possess a band to spend years listening to and touring on an album like The More Things Change and then come to decision that they need to do this again...but that seems to be the motivation behind Machine Head's third full-length The Burning Red. If there's one difference here it's that the guys are clearly trying to sound a lot more like Korn than they already did, so you can bet the chug-laden hip hop influences are being cranked up to the extent that even Diabolus in Musica might be embarrassed to be found in its company. Full disclosure, as I've said before, I don't actually have a problem with the idea itself of mixing rap music with heavy riffing, it's just so rarely that I've heard it done well. If I do, it'll have my respect. Most of the nu metal bands who flirt with the idea take more of a rhythmic influence from that hybrid, with the bouncy beats, lyrical attitude, bass lines and guitar tricks that are attempting to emulate record scratching or other stylistic translations.

Korn had already worn us out on that with their first 2-3 albums and Machine Head doesn't seem to accomplish much more than that several years later. So if you're truly enamored with Life is Peachy or Roots, get on with your bad self, but I think The Burning Red is notably worse than either of them. Robb does try his hand at rapping in the actual lyrical delivery, as in "Desire to Fire", and that comes off just as goofy as you'd imagine, you can just picture in your mind the hand movements he'd be making as he was bouncing along in the studio. I'm not saying he's the worst at it that I've ever heard, but once it surges into that lame chorus groove which sounds as if it's just been replicated off the last album, it just becomes too unintentionally hilarious. Add to that the monotonous crooning he adds to try and keep it all in the radio realm during the age of Creed and Alice in Chains, and we're in for one dumb fuck of an album. But it doesn't stop there, because that's basically the formula for almost the ENTIRE experience...dull churning nu metal guitars, rapped out pissed off lyrics, funkier or dissonant guitar lines and almost no ability whatsoever to turn in an interesting chorus. I mean come on, even Linkin fucking Park can deliver on the chorus, the best Robb Flynn and the bros here can accomplish is to sound like Limp Bizkit's steroid-addled cousin...or like a Jonathan Davis with far less personality and equally dumb lyrics.

When this formula IS abandoned, it's to go even further into post-grunge woozy commercial 90s heavy rock territory with the 'emotional' parts like the verses in "Silver", which just sound like some drunk guys trying to get their Nirvana, Pearl Jam or Silverchair on. The lyrics once again come off like some distraught middle schooler who really wants you to know all the pain and castigation he's been through BUT HE IS STRONG AND DON'T FUCK WITH HIM...as long as it sounds personal, has no capacity to engage anyone with genuine intellectual depth, and rhymes, let's pay ball. They read like the lyrics Fred Durst would have come up with if he was doing an audition for Hatebreed or Madball before they jettisoned him from the rehearsal space moments later. You could literally punch Durst in over Flynn on "Exhale the Vile" and not know the difference. Give me any lyrics about Satan, Vikings, motorcycles or B-movie bloodbaths any day over this nonsense! The cover art sucks. The cover SONG sucks..."Message in a Bottle", how original...Excel did a great version of that a whole decade before this lazy and laughable execution. Maybe when you were in Vio-lence and actually had an ounce of talent, you should have paid more attention to the other thrash bands from your State?