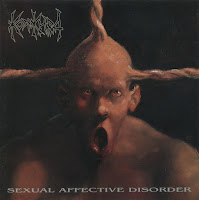 Sexual Affective Disorder was not about to transform Konkhra into your new favorite death metal band of the early 90s, but it's clearly a more coherent and effective effort than the Stranded EP before it, transforming the Danes into an outfit slightly more deserving of your respect. The style isn't much changed, as it's still among that class of older death metal which wears its thrash influences on its sleeve, but here even that takes on a more oppressive vibe as it is performed with a concussive, clinical force. While the EP at times felt sloppily or hastily assembled, the songwriting here is more taut and brutal, neither the most technical or nuanced among a broad field of European candidates, but not taking any prisoners. Also, who could forget that strange cover, by noteworthy Danish artist Michael Kvium, with its the twisted knots erupting forth from this creepy's psyche? Simpler than what other bands were using, but quite uncomfortable nonetheless!

To me this album most feels like a hybrid of Dutch bands with the first few Cannibal Corpse albums of the Chris Barnes era. Aggressive thrash rhythms intensified with blasting drums and a thick as fuck, saturated tone. Sometimes that is to the album's detriment, as the non-pummeling guitar lines are far too overwhelmed by the central rhythmic battery. The leads, which are nothing special to begin with, just sound like insects buzzing past your ears. However, you won't really have too much time to mourn the loss since the record will keep kicking and slamming you in the chest with its destructive low end. The drum performance here is far tighter, and the riffs flow fairly well into one another, and even though they're not supremely catchy, they at least always feel exciting, like they are right on the edge of being more memorable but just never got that final push in the writing phase. A few brutal death techniques like pinches and squeals are also incorporated, though once again they can be drowned out a little by the bludgeoning impacts of the instruments honed almost entirely in on how this material is going to come across in a mosh pit.

Vocals also sound a little better, still a mix of the visceral snarls and lower growls, but there is better sustain on some of the lines, it just sounds more bloodthirsty and dangerous. I could swear there are even a couple cases where they belch out this really deep guttural and it's hilarious. Though the use of dynamics is far from perfect in the structure of the songs, it's a lot better than the prior release, and there are some really intense moments here like in "Evilution (Exordium Expired)" where they are just firing on all cylinders and those guitars and drums and growls just punch you the fuck out. I mean if this album had...better leads, or a better mix on the leads, and just a few catchier overall riffs, I feel this easily could have been one of the cult death metal albums everyone kept worshiping for so many years later. It's just not quite there...but it aspires to be, and for that reason I'd probably rate this as one of the better albums in their whole catalog. If you're into early Sinister, Gorefest, Cannibal Corpse or Malevolent Creation then this is one you might want to visit if you haven't already heard it. Despite the production failures, its got a crushing confidence about it.