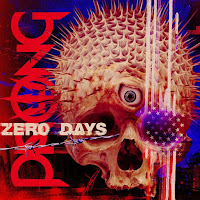 Zero Days frontloads what I believe to be its least compelling track, "However It May Ends", one of the heavier here to be sure, with a big brute Biohazard groove and some stock thrashing passages, but even there you can tell they're trying to round it out really well with a cool, melodic chord pattern behind the pre-chorus. That's not to forgive a lot of the vapid, boring chugging that fuels it, but I doubt too many people would hear this opener and feel like the band is in any way lacking an energy far beyond its years, even if you cannot stand the somewhat lackluster creativity of the riffs. While this is a symptom of a few tracks on the disc, I'm happy to say that overall this is the best of the albums since Carved Into Stone, and the effort that went both the production and variation is more than apparent.

Like X - No Absolutes before it, Zero Days plays like a sort of career retrospective packed into a singular experience that is streamlined through the loud, punchy production. You've got a lot of material here that is pretty much pure thrash, weighted by walls of dense palm muted riffs that are likely trying to keep it heavier and relevant with a lot of the popular styles of the 21st century. A lot of attention to detail is given to the lead guitars, and there are even obscure little tributes I noticed in a few of the songs. For instance, in the title track, there's a point where you're getting these hyper picked, dingy little guitar rhythms behind the bridge which remind me a whole lot of the tone and style on Force Fed. Some of the note progressions and structure of "Rulers of the Collective" feels a LOT like "Rude Awakening", almost as if they took that track and just remade parts of it, tucked it away on the latter half of this album to see if any of us were paying attention. These are probably too subtle details for many to pick out, but I just wanted to reiterate how cognizant this record is of the stuff Prong had written before it.

That said, they do try new patterns, catchy chorus parts we've not heard before like in "The Whispers", a cut that partly feels like it would have been a natural on Cleansing. "Interbeing" is one of my favorites, opening with a very Testament style thrash riff and delivering on some of Tommy's most interesting and almost robotic sounding vocals, with a pre-chorus and chorus that really paid off. "Divide and Conquer" is another fresh-feeling track with some nice bass effects, and a bit of a Helmet feel only through that more mechanical Prong lens...again, another very strong chorus which wouldn't be out of place on the alt rock radio. New bassist Mike Longworth fit in smoothly with a huge tone and plenty of moody lines that enhanced the tracks, primarily in the verses, although he would soon be replaced by Jason Christopher's return the following year. The lyrics are solid, Victor turning in the consummate professional performance all around, as he should with the massive level of experience he's got writing and touring in some pretty huge bands. Arturo Cruz, who ironically would be leaving himself after this, also has a flawless contribution, drumming that can flex with whatever style Prong is cycling through at any given instant, and emphasizing the groove and heaviness, even where it feels the most generic. And that's about my only real complaint, some of the heavier riffs here are just too bland, been there, done that, even predictably djenty in "Compulsive Future Projection"...and everything else just deserved better. But it's still a good album if you're willing to embrace its broad appeal.