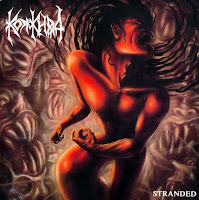 I can remember a time when Konkhra was poised to be one of the Danish representatives to that class of European death metal bands that broke out fairly big in the 90s...Hypocrisy, At the Gates, Dark Tranquillity, Dismember, Entombed, and so forth. The band has endured for 30 years, with a few notable gaps in productiveness, but they haven't quite reached the same level of stardom as so many of those peers that would go on to labels like Earache, Nuclear Blast and Century Media. I fault it partly to the fact that their sound seemed to my ears to drag in a little bit of blander groove metal influence as the decade rolled on, not distastefully so, but enough that they were kind of straddled for a spell between the realms of the more death metal diehard audience and the tribal mosh krews.

However, during their formative years, Konkhra was in fact a more formally death metal outfit, as you might be able to tell from the first few covers to their releases. Stranded was their first 'pro' release after a couple demos, a six-track EP of churning, chugging low end death metal with the exchange of guttural and snarl inflections that were made popular by Carcass and Deicide, although the Danes don't quite sound the same in terms of how they put their vocal lines together, and even add in a few bits like some spoken word alongside the roiling riffs. I can certainly hear a bit of Chuck or Martin van Drunen in some of the growls, but then others go with the deeper guttural. There's a sort of confusing, chaotic underbelly to this release which I actually quite dig, only it's let down by a pretty bland set of guitar progressions which just don't ever seem to manifest in the memorable riffs that were the hallmarks of so many of the groups we celebrate from the era. Several are informed by thrash chugging that collapses into sloppy tremolo picked parts, but while the spirit is there the songs simply aren't.

There are some weird noises flushed through some of the material here, like in "Stranded" itself, or "Deathwish", which I couldn't quite figure out as either some sort of badly mixed lead guitars or special effects. The tracks occasionally grow a little more coherent as the EP progresses, like "Lustration of the Need", but even then you're just not getting top shelf riffing. There are a few other highlights like the magma flow of the bass in "Spread Around", and I almost felt like one or two of the riffs in that one were going to deliver, but sadly the ideas here just weren't all that brazen, bold or interesting even by 1992 standards. Compare this to something like Invocator's Excursion Demise, which had come out the year before, and was a lot more thrash-oriented, but this material can't even hold a candle to that. So Konkhra was off to a cluttered, rough start with Stranded, a product of its time that doesn't hold up with the possible exception of the murky core that generates nostalgia for old basement and garage death metal demos when the medium was a lot more 'innocent'. But, like many things with age, this band will only get better before it gets worse.