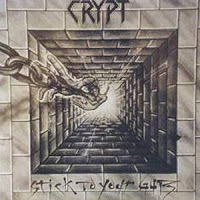 Imagine it's the 80s and you've landed the name Crypt for your band. You're smack dab in the center of a budding Canadian scene which is producing a wide range from traditional heavy and speed metal gods like Anvil and Exciter to thrashing standouts like Voivod, Razor and Sacrifice. What is your next move? Well, you release your one and only full-length album on vinyl, maybe a few hundred people check it out, and then you disappear and languish away in total obscurity until one day your rare record gets a reprint from a European label that specializes in such things. That seems to be the story for these Quebecois heshers, but when we dig down and examine the music they recorded, there's no real reason that they should have earned such little attention other than the fact that the genre was quite heavily saturated at the time...at least what we'd consider 'saturated' in that day's standards, today there are likely more metal albums released in certain months than in all of 1987.

If Stick to Your Guts was any indicator, Crypt was a fairly competent act that might have suffered from redundancy with other, more exciting bands of their era. The style here is one that might be primarily mirroring USPM acts like Helstar, Liege Lord, or Lȧȧz Rockit, at least how those acts sounded on their earlier albums. You've got a mix of very straightforward heavy metal tracks like "Castaways" and "Darker Than Hell", with basic riffing patterns and predictable choruses, and then a couple tunes which show a slightly darker and more complex side, and are coincidentally far, far better than the stock metal that the band falls back on. I'm talking about "Metallust Fever", which almost sounds like it could have fit pretty well on Burning Star, with great riffs and one of the better vocal performances on the album. He's got a kind of tough guy street metal mid-ranged inflection that he alters between screams, some of which sound cheesy throughout the album, but occasionally hit you hard like Tyrant from Jag Panzer, another group with some stylistic parallels to this one. At other points he definitely channels some of Bruce Dickinson's intonations.

The major issue here is that a song like "Metallust Fever" is so vastly superior to so much of the other material that the album can grow disappointing after that ends... Sure, a few numbers try, like "Wings of Omen" with its pumping Iron Maiden bass-lines or "Die Sister Die", which feels like some lost 1980-1981 gem from either the NWOBHM or L.A. scene, and has some atmospheric, interesting cleaner guitars which wouldn't be out of place on an earlier Fates Warning prog metal effort. "Reich Master" is another fun jam with some cool leads and a nice, dark aggression to it despite the traditional triplet picking it cruises along with. But I'd say the quality is very uneven, a few of the tracks could have been discarded and replaced with more stuff like those I just listed and this could have become a cult classic with ease. Another complaint here is that, while the guitars and bass are generally quite good, even adventurous, on some of the tunes the entire rhythm section just sort of blends together into an indistinct punching force. The rhythm guitar tone is kind of boxed in throughout, but thankfully it still sounds decent in balance against those bass lines. The drums are a little poppy sounding and detract from the heavier riffs, but they get the job done. As a general rule, the heavier, darker and more ambitious the Crypt tune, the better, and despite the album's several inconsistencies in production and songwriting, I've enjoyed more than I didn't. I think this is a rarity which might hold some appeal for fans of genuine old USPM, especially that which cops a lot of DNA from Maiden.