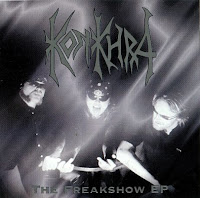 As Konkhra maneuvered through the 90s, they started weaving a lot more groove and direct rock & roll influence into their sound, not unlike other European bands Gorefest, Entombed, Desultory, and so forth. While some of them were able to successfully meld the styles together, at least after some growing pains, these Danes struggled to make much of a dent. Albums like Spit or Swallow and Weed Out the Weak continued to get progressively dumber, and I'd say The Freakshow EP might have been the lowest point for them, although the Come Down Cold full-length also features some of the tracks here and others like them, so that was arguably the more substantial crisis than a throwaway short-player like this one.

Essentially this is bluesy hard rock & roll with a lot of similarities to Black Label Society, or Pantera's later 90s material, and it definitely tries to ape a lot of the swagger of the latter. Guitars are pretty standard stoner rock fare, with wah wah pedal sprinkled on liberally. The riffs are far from the worst, and there are some leads or flashes of melody throughout that aren't bad for 90s alt metal, but it's the vocals mixed with the music that really kill it for me. Gone are the gutturals and snarls, having been replaced by a 'hwaaaaaahhh' 'yeaaaaah' gravelly pitch which is just nowhere near as cool. I mean maybe if Anders Lundemark was playing in a low down dirty raw blues band and tried belting out these sorts of vocals it might actually sound pretty good, but here it's just goofy, and even if you can believe it emits more passion or character than just the cookie cutter growls of yesteryear, I'd argue that character sounds like a morbidly obsese Phil Anselmo about to go coronary, or someone doing a bad L-G Petrov impression while cocked out of his mind at the corner bar.

Although the music isn't terrible, just tune in to the two covers of "Prowler" and "Orgasmatron" to see how vapid the original compositions are by comparison. Hell, the latter tune has barely anything going on with it, and never has, but it's still better written than Konkhra's new originals, and the vocals sound pretty horrible trying to ape Lemmy with that lower, creepier register, which lazily lopes alongside the zipping, bluesy leads and super primitive chord repetitions. Musically the tunes are played pretty close to the belt, but there are better covers of them and these certainly don't tack on much value to what is a pretty lame release altogether. Even divisive death 'n' roll records like Swallow the Snake, Soul Survivor, or Vermin's Millennium Ride are far superior to this one. And I don't want you to think I just look down on this hybrid of sounds, hell I enjoy every album Entombed has ever made except the two in 1997-1998 (which just took the rock thing too far), but Konkhra's contribution to the niche were weaksauce.