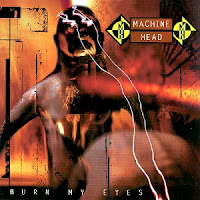 Machine Head is a bad band which becomes even more tragic for me when I look at what some of its members had accomplished years before its creation. That's not to say that Burn My Eyes is in any way the Californians' career nadir, far from it, but when I compare even this earlier effort to the first two Vio-lence albums that Rob Flynn played on it becomes instantly disappointing how much the guy absolutely sold the fuck out to whatever was trendy during the 90s. To be part of such kinetic, vicious, nearly flawless thrash metal like Eternal Nightmare, fully capable of causing the mullets to frenzy about and moshing to naturally erupt without the need for cheap breakdowns, and then later start up a band for which banal tribal tattoo mosh culture was the entire impetus to exist just comes across as depressing. Perhaps he was burned out with the diminishing success of his alma mater, who themselves were decreasing in quality as the changes in popular culture demoralized the second and lower tier thrash acts to try their hands at a more mall-accessible brand of heaviness, but virtually every effort I've heard from this band has felt like a dull slap in the face with a side of stale, bruised beef.

To be fair, Burn My Eyes is at least someone in touch with its thrashing foundations. Flynn and crew were unquestionably listening to bands like Biohazard and Pantera, probably also closely following the path that Brazilians Sepultura were taking, and this debut feels like someone had packed, beaten and kneaded those flavors into a rough thrash taffy by the pier. The focus is clearly on making big dumb grooves to hold the tougher audience elements' attention span, hip hop with chords and chugs, but then the band lacked the NYHC street cred, or the overbearing personality of Phil Anselmo's vocals, or Dimebag's ability to compose such sticky riffs. Burn My Eyes gets some credit for me though in how Machine Head manages to balance off its dynamics and give the meatheadedness some atmosphere. Part of this is accomplished by having such strongly produced drums, they really thunder around here and make even the more primal and predictable riffs stir the blood more than I'd have otherwise expected. Adam Duce's bass-lines sound pretty good throughout the album, thick as a brick. The shouted vocals are also well mixed to tap into the caveman genes, and they do occasionally manage to alternate some other tempos into the 'jump da fuc up' riffs which are probably the money shots the band and Roadrunner were counting on. There's also a little tendency to incorporate some mechanical higher pitched guitar lines in to flesh out the groove, I'm occasionally reminded of Prong circa 1990-1994, although Tommy Victor was far better at writing good music.

I mean if you just got out the gym back in the mid 90s, grabbed a copy of this over at Tower Records and had a little testosterone left to channel, I can imagine that the gut punching duo of the singles "Davidian" and "Old" would have been the best thing ever! Unless of course that you already had been listening to metal music for any length of time before that and realized that the aggression in the medium doesn't always need to be so tailor fit toward its most shallow instincts. Flynn tries to spin a lot of the tough guy sustain on his vocal lines, but he's just never had the bravado of Anselmo, or perhaps it's that he was lacking the Southern accent that put Phil over the top. He actually sounds like he's half-way between THAT Phil, and another Phil, Rind of Sacred Reich. The rappy vocals on songs like "A Thousand Lies" were mirroring Biohazard, but in that case lack some of the goofier beefcake charm of those topless, chiseled Brooklyn brutes; and a few of the cleaner lines seem like they lack confidence, as in "None But My Own" where they sound sort of drugged and dopey. Guitars grooves here like the breakdown in "None but My Own" sound like they're just doing their best to mimic stuff from A Vulgur Display of Power, although I'll cut some slack in that the very structure, mechanistic patterns seem to live up to their namesake.

The lyrics are far from the worst I've read from a lot of the groove metal bands of the 90s, but still just a combination of pretty obvious cliches about personal suffering and strengthening with some topical remnants of the 80s thrash that the band grew out of. The cover artwork is awful; is this weird blurred out guy copulating with the person in front him, or is that supposed to be the same dude head banging hard and being caught in various positions of the act? Whatever the answer, bro, it definitely makes me want to burn out my own eyes, so I can't blame Machine Head for false advertising there.