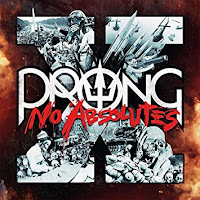 The tenth Prong full-length once again revisits the bands hardcore thrashing roots, drawing a lot of parallels to their early offerings like Primitive Origins and Force Fed, with the caveat that they've kept on board the modern production choices that defined a lot of their other 21st century recordings. It's arguably got one of the better studio sounds they've every pulled off, at least for the ears of a contemporary audience used to the clarity and loudness rather than the rough edges that outlines a lot of thrash records back in the 80s. X - No Absolutes has its moments, but ultimately I found the album a little frustrating in just how many of the tracks were so close to being great, but just didn't have quite enough of a catchy riff-set or chorus to totally stick with me; it's an album I 'like', but one that could have easily been a 'love' with some further tweaking.

Now, while I stand behind my earlier statement that this was a band going for a more stripped down and straightforward flashback to their formative style, that's not to say they completely abandon the steps they've taken along the way. You'll still traces of the groove metal of the lame Scorpio Rising on a few cuts like "Without Words", although it's more effective and better-written, butting up against the more uptempo crossover/street thrash a la "Sense of Ease", or "Cut and Dry" which brings back a bit of that mechanical oomph that structured records like Beg to Differ. They also still use a lot of the more melodic chorus parts in tunes like the titular "No Absolutes" with a pretty decent harmony. A lot of focus goes onto the lead guitars throughout the album, and while few of them are really what I'd describe as a show-stopper, they're all competent and effective in their respective tracks. Tommy's voice sounds fantastic and distinct as it almost always does, effortlessly channeling both the urban bluntness and the more occasional melodic phrasings that keep it interesting. The rhythm section of Cruz and Christopher keeps it all locked pretty tightly, although I'd almost never say the drums or bass are ever features of this record.

The one side they don't really touch much here is the industrial/electronic stuff, but instead there are a few tunes deeper in the track list like "Belief System" or "In Spite of Hindrances", where they're trying something slightly different, like a dramatic, choppy, heavy alt radio rock. I can see how these might turn some of the audience off, but I can't say they sound all that bad in this context, even if these are far from my favorite tunes on the album. Prong is never going to be Linkin Park or Sum 41, but I'm hardly offended when they do a decent job with the more accessible fare, and it's at least better written than what, say, Kreator was coming up with on Endorama. I just think it's sort of tucked away where few people are ever going to explore it, and when run against some of the harder hitting cuts on the album like "Sense of Ease" or "Worth Pursuing" it might create too much of a disparity. X - No Absolutes might actually feel like the 'matured' Prong, still loyal to some degree to what burst them up through the manholes onto the scene in the later 80s, but produced for ears that have spent the ensuing decades listening to rock radio. The brashness and venom have been drained out of the sound, but they still sound very much themselves, and this album is about on the level with its predecessor Ruining Lives when all is said and done.