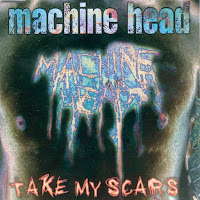 Why does Japan get all the nice things? Alright, the adjective 'nice' is debatable when discussing any of Machine Head's garbage, but the point stands that in decades of musical obsession I've run across loads of albums and singles that are fattened up for sale over there. Granted, they pay a higher price than we do on a lot of these goods, but even for something as lowly as this EP you're getting a lot more content. Really, Take My Scars is more of a single, featuring the titular track off The More Things Change and then a B-side cover, a couple of demo tracks (oh boy!); but the Japanese edition also includes nearly a half hour of live material. Now, I couldn't tell you for the life of me who this would be for...I know the band was and likely remains within the 'Nu Metal Top 10', but was there really a huge market for copious maxi-singles from bands like Korn, Sepultura or Machine Head?

I've made my opinion on "Take My Scars" clear, it's a crappy nu-metal jam that sounds like it was strung together from the first few notes that popped up during a jam session, boring chords that do nothing other than emulate a primal hip hop groove with a little hardcore anger. That track is here in both a studio and live incarnation, and doesn't sound less awkward in either. I think the big draw on this would be the cover of Nirvana's "Negative Creep", which plays it pretty close to the original only adds a little fatter guitar tone. Robb's vocals are lower pitched than Cobain's, but he throws in a lot of wild screaming that almost make me wish he would just do that more often in his own band. In fact when listening to this it sounded a lot like another of the Seattle grunge bands, Tad, who I enjoy, covering Nirvana, and that alone makes it superior to all of Machine Head's original material here. The two demo tracks sound awful, nothing more than rougher cuts of what you hear on the radio and they don't improve anything except having that bridge to a more live atmosphere.

The five live cuts are from the band's limited two-album run at the time, and in terms of recording they do sound alright, provided you're already a fan of sub-mediocre music. It does sound a little messier, more pissed off and the hardcore parts on cuts like "Blood for Blood" sound even more hardcore and heavy in this context, so there is that to say for it. Of course if you aren't tracking down this very version of the EP then you won't hear those at all. Ultimate, Take My Scars isn't a product I'd recommend to anyone, but then again in general I wouldn't recommend any of their stuff, at least not for a big chunk of their career...let's explore further and hear if there are any diamonds in the rough.