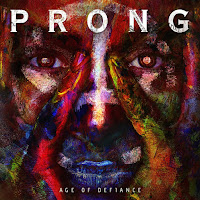 Age of Defiance is, I'm assuming, a teaser for whatever the band is to release as a follow-up to 2017's full-length Zero Days, paired up with a trio of live cuts from a German club date back in the middle of this last decade. I was immediately taken with the dense sound they pulled off in the studio, whether they're banging out heavier chords or chugging along this one sounds like what we might have expected of a modern Prong in the 21st century, and yet it manages not to lose the subtleties created by the warmer melodic chords and Victor's voice. A full-length album with punch like this is going to turn a lot of heads and work wonders towards the trio's relevance movement forward into yet another decade, but at the same time I'm not going to say that these are necessarily their best songs.

Essentially you're getting a microcosm of many of the band's evolutionary shifts all in one package. There are still plenty of basic thrashing guitars, especially in "End of Sanity", though they were rather bland riff-wise, reminding me there of maybe Testament. The vocals are great with all the backups, and the chorus chords tend to be the more interesting parts of the songs, with some nice lead guitars to flesh them out. The rhythm section sounds great in this mix, the drums thunder along and though the bass doesn't do much of its own thing, it's thick enough to be noticed against the meat of those guitars. I think "Age of Defiance" itself is the better of the two new tunes, largely because of that melodic airiness created through the guitars in contrast to the churning, chuggy lows. It doesn't sound unlike a track from the Cleansing era, there are even some small electronic flourishes, and just a very satisfying chorus even if the verses feel underwhelming outside of their production. I think these work well enough as a sampling of what the next album could sound like, I just hope Tommy has stocked up some better, more varied riffs to go with the excellent vocal performances.

The live cuts sound alright, perhaps not as good as on the 100% Live album, but the tones sound pretty thick and effective on "Rude Awakening", "Another Worldly Device", and "Cut Rate", the latter two kicking some butt like they used to. It's interesting that all three of those tunes are from that 1994-1996 era, maybe Prong is telling us that those styles will be the focus in the near future, or perhaps I'm just reading too much into it. At any rate, while these lives don't disappoint, they will never be a reason for me to spin this, I'd rather have had more originals, so they're not exactly a huge value, though they do work well aesthetically with the new material. We'll have to hear where it all goes from this point, but if nothing else Age of Defiance reveals that Prong could potentially put out a more substantial, killer sounding disc, and the tracks at least have some seeds of memorable ideas.