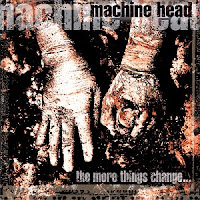 Where Burn My Eyes sounded like it might have at least been extracted from some fossilized metal DNA of integrity somewhere along the path of its inception, The More Things Change... is little more than a giant, blubbery surrender to the most vapid and idiotic nu metal trends of the 90s, and revisiting this sophomore was admittedly both hilarious and embarrassing as I tried to scrape the dregs of the barrel and find anything, just ONE thing positive I could actually say about it. This is basically a mix of the first two Korn albums, Sepultura's Roots, and a little of the Biohazard and Sick of It All influence returning from the debut, manifest though the least shitty riffs found here, in tunes like "Stuck a Nerve", if only because bland hardcore riffs are far less obnoxious than the alternative Robb Flynn is providing us.

I suppose the production is fine for what it is, Adam Duce's bass tone standing out here against the churning, boring chords and the occasional higher pitched, primitive droning guitars which are used to add at least some other sort of dimension to the material beyond just the grooves. And these are absolute rubbish nu metal riffs, which took next to no time whatsoever to conceive as they merely bounce back and forth between maybe 2-3 chords max. The band does reach out to create a few added dynamics as in "Down to None" with its dissonant guitars over a slower groove, but even there the results are little more than ennui as they can't ever seem to capitalize on a less throwaway riff with anything explosive or interesting. "Take My Scars" is a prime example of how bad this is with its mindless, lazy chords, and how Flynn tries to inject some mid-ranged doped up Alice in Chains style vocal to create a contrast or chorus to the roiling nothing below. The Rage Against the Machine guitar 'scratches' and angry hip hop vocals are also hilariously lame. The lead guitar, as basic as it is, almost seems out of place for trying to be too ambitious to what this album is all about, the cheapest cashing in on the LCD of metal music.

Now I'm not opposed to really basic riffing structures, grooves or breakdowns if they're written well enough, hell I'm a pretty big fan of Helmet records like Meantime and Betty, which are likely also influences that rubbed off on some this mid-90s Machine Head era. But these guys just lack any trace of personality, it's as if you stripped down the already-basic ideas of nu metal, took away any of the goofy costumes or vocal gimmicks of the more visible bands in that scene, and came up with a generic blueprint on which to teach grade schoolers how to jump da fuc up with their wallet chains flailing around. The cover font, lazy, the cover artwork, pretty typical stuff that looks like half the proto metalcore records I used to have in the early 90s, and the lyrics are about of trite garbage like "So c'mon, c'mon, c'mon, we gotta wake up!" Are you also down with the sickness? As a general rule, the more atmospheric the album gets, where it doesn't rely 100% on the dumb nu metal bounce parts, the material becomes ever more tolerable, as in "Blood of the Zodiac", which is tucked away at the end of the track list with its eerie intro, primal pensiveness and bluesy, sad solos. It's hard to believe this ISN'T the worst album in the band's catalog. Can it get much worse? Hold Robb's beer.