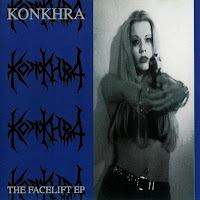 After Sexual Affective Disorder, Konkhra decided to ditch the freaky death metal artwork and enlighten us to their fetish for beautiful women with handguns, first turning the firearm upon the audience (The Facelift EP), and then back upon herself (Spit or Swallow). Very clever, I see what you did there, blokes. When it comes down to the songwriting, however, The Facelift is quite in line with the album before it, only it feels like a fire has been lit beneath the Danes as they seem to opt for a more uptempo and energetic approach to the bludgeoning death metal. I mean this did come out before Slaughter of the Soul, and it's nowhere near on the level of quality writing as an album like that, but it feels like a band similarly possessed of wanting to mete out more exciting fare than what they'd been getting up to before it.

And at four tracks and 14 and a half minutes, you probably want to keep this material concise and engaging just because you don't have much space to experiment. Konkhra launches "Drowning (Dead Dreaming") and "Facelift" itself straight at you, two ragers that feel like they've been picked and accelerated from the crop of tunes embodying Sexual Affective Disorder. Definitely a little bit of D-beat-like fury propelling them, especially the title track, but affixed with a lot of the brutal low end chugging guitars which feel punishing and nihilistic for their lack of any real melodic value. There are some leads here, and as usual they're a bit too flimsy, however I will give some credit that I was able to better hear them than on the two prior releases and it's a step in the right direction. The drums are agile and effective, while the bass has this great, fat tone warbling along under the oppressive palm muting which is probably the best it had sounded so far. The vocals are still decent in either the guttural or snarl intonations, but oftentimes I felt like they were just bobbing along on the sea of highly destructive chugging which creates such a percussive blitz that nothing can compete.

"Warzone" gets a little slower, but just as chug-heavy, with some sections where you can really hear that bass guitar come out on its own. This one is meant for brawls to break out at gigs, so to that degree it's effective, although obviously less exciting than the others. Lastly you get a 'live' version of "Basic Facts of Life", which sounds almost too perfect, and here you can even makeout the little lead guitar effects even more, which are pretty cool to balance off against the bass and drum grooves. This is another utter mosh-fest, almost with the street hardcore backbone to it, and to be honest was my favorite track here, although it's all really primitive, caveman aggression. Again, like with Sexual Affective Disorder, this isn't one I'm going to recommend based on good licks or songs that will become your favorite in the death metal medium, and possibly not recommend at all, but if you do really like the basics delivered with pounding, crushing force, you could do much worse.