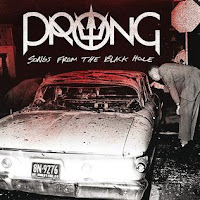 Songs from the Black Hole is not the first instance of Prong dishing out a few cover tunes, they've done a few before like "Get a Grip On Yourself" by The Stranglers back on Prove You Wrong in '91, but here the entire focus is on selecting, performing, and producing a professional series of covers from an eclectic range of influences. Considering the range of styles Tommy Victor and company have cycled through as they evolved the sound of this and, I thought this might prove a fairly interesting tribute, and at least as far as the track selection I wasn't wrong. They draw pretty heavily on some of their hardcore, punk and post-hardcore faves, which makes sense since their earlier thrash records totally emerged from the primacy of the NYHC, and as also might be expected you get a few cases of industrial or Gothic rock which clearly rubbed off on records like Cleansing and Rude Awakening.

They certainly have good taste, and the sound here is about as clean cut and polished as any in their career, at least on the level with Carved in Stone, even on the nastier punk and hardcore tracks they pick like "Doomsday" from Discharge and  "The Bars" by Black Flag. They're a natural at these, and Victor's voice sounds pretty good channeling all the proto-hardcore rage, so even if they sound slicker and less nasty than the originals they're totally energy-charged and fun to listen through. I thought the rendition of "Vision Thing" by Sisters of Mercy was rather bland, or rather it just felt too close to the original and not terribly Prong-i-fied, but on a similar note Killing Joke's "Seeing Red" is really excellent, as their cover of "Give Me the Cure" from Fugazi. Bad Brains' "Banned in D.C." will give you another swift kick in the ass, and they manage to twist the Butthole Surfers' "Goofy's Concern" into something fun. I think the one that they most successfully transform into a Prong number here is the Adolescents' "Kids of the Black Hole", and along with "Seeing Red" it was one of my faves on the album, just sounds like something they could have put on one of their own albums in the mid to late 90s before the hiatus.

The track that is most out side their box though is Neil Young's "Cortez the Killer", which is still played with a lot of the drab bluesy abandon you might expect from the original, although they do electrify it a bit more. I'm not actually a big fan of the tune or Young in general, so I constantly just felt like ending the album with track #9, but Prong definitely does a respectable job of it. And that's really the selling point here, diehards who want to hear where some of the band's inspiration hails from will be treated to well structured, well produced material that largely shines a light on such influences. Maybe a few of these are outliers and don't factor much into the regular Prong sound, but Discharge, Black Flag, and Bad Brains clearly did in their formation, and Butthole Surfers and Killing Joke would inform a little of their evolution in the 90s. Would I ever recommend this over their original albums? Not a chance...in fact, despite the level of care they obviously put into this, I do get a little bored with some of it, and if I do spin Songs from the Black Hole I'm headed straight for just 2-3 of the tunes. If you're new to the band you really want the first five albums, or maybe Carved in Stone. I don't even know that I'd recommend it to Prong fans unless they really want to hear this voice over someone else's material. But I don't have a lot of negative to say, on a technical level it's a solid product as far as these cover anthologies go.