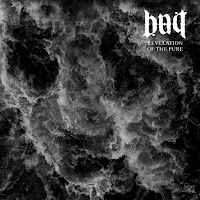 Bait is another in a succession of European bands to blend together the ideas of post-metal, hardcore and sludge into a forceful, cohesive sound, not really allowing any one of the primary influences to overpower the others. While a number of similar acts seem just upon the precipice of making the hybrid memorable, this band won me over almost immediately with its dark, dynamic sense of rhythm, enormous and effective production values and seamless integration of atmosphere and aggression. Revelation of the Pure is an impressive showcase of rage and melancholy which feels like you've been run right up against a reef of bared emotions and then before you even get the chance to straighten yourself out it starts tossing you around on its stormy surface until you're boneless.

Floods of haunted, mournful chords charge along over this thick, pumping bass tone which often gives off the impressive of an evil, more muscular Fugazi if it were soaked in angrier hardcore. The wall of sound created by the guitar not only anchors you with those heavy low-end chords but also with these ceaseless streams of atmospheric, higher distorted notes which just fleshed out their style so much that I found it hypnotizing. The drummer is a powerhouse, with perfect fills and kicks that keep it all from lapsing into chaos, and pair him up with that bass, some of the more dissonant riffing and the vocalist's energetic mesh of hardcore barks and black metal rasps and this will totally mow you down. I'd almost liken it to the more interesting, unique metalcore bands of old like Coalesce, Botch, or Keelhaul, only viewed through that darker lens where the post-black influences are just as important to how the songs are woven. Tracks like "Lightbringer" and the title cut had right on the edge of my seat, I had to hold myself back from moving, which might have looked really silly all alone in my small office, but this band...just...has it. I admit that I've not always been highly receptive to a lot of this style of material sent to me by labels like Les Acteurs de l'Ombre, but this one just nailed me to the cross and left me hanging there in a dazed, bloody, bruised stupor.