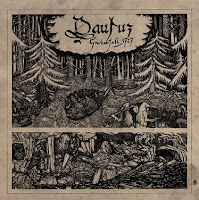 Dauþuz is one of Germany's finest active black metal bands, and most fascinating, if not so much in the musical construction than in the historical and folkloric focus of the lyrics. When I saw the title to this new EP, I thought it sounded familiar, and indeed it's named for a track off their 2016 debut In finstrer teufe which has been lengthened and reworked for this release. In fact, two of the three tracks here are re-recordings, but the nearly 20 minute finale is an epic new track which really serves as the centerpiece, and although I don't mind hearing new takes on previously released material, it is this closing epic which actually gives the EP enough value that it would be worth tracking down if you've enjoyed their other stuff.

"Grubenfall 1727" itself has been given an addition couple minutes of acoustic build with some subtle clean vocals, almost a later Viking-era Bathory feel, and personally I think this improves upon the original...although the transition to the black metal surge is a little abrupt, it works well to give a little balance to a powerful track. Dauþuz creates emotional if traditional melodic black metal with some simple note and chord patterns that prove timeless in their hands, and an excellent interchange of a harsher rasp and then a more suicidal, higher pitched alternative which is just awesome. The guitars are monstrous, captured raw but potent and really throwing me back to an early 90s mental space. "Kerker der Ewigkeit" is the other re-run, and although I think I like the balance of the mix here I feel like it's the least changed, in fact the vocals sounded a little more savage on the original and I might stick with that. "Die letzte Fahrt" is the main attraction, and begins with more clean guitars dusted with some of the crazier suicidal vocals, then surges through a number of mid-paced glorious sections; while there is plenty of repetition there, I never found myself board at the tune's enormous length, because the duo of Aragonyth S. and Syderyth G. is just so good at what it does...

Overall you get a very Blood Fire Death feel here, not nearly as legendary, but for a bunch of tunes about mining in ancient Germany it'll do in a pinch. The production aspires across the three tracks as they know how to apply just the perfect level of atmosphere created through the soaring chorus parts or the guitar tone, and when they cut out for those nastier rasps, percussive breaks and melodies it is pure atavistic power. That said, with some of this material being retread I don't know that I'd attribute it with the same amount of value as their great EP Des Zwerges Fluch, which had more and better tracks on it. In fact, if you're just checking out the band for the first time, you'll want to head straight for that one, or their sophomore full-length Die Grubenmähre, or last year's Monvmentvm. And then if you've enjoyed all that, this is worth checking out for sure. A reliable and immersive black metal band that I'll continue to follow thanks to their vision and consistency.