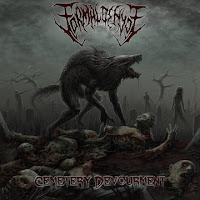 Formaldehyde is a brutal Oklahoma death metal band which put out a few demos in the later 90s and then disappeared, only to return over 20 years later with some new blood in the lineup courtesy of Horde Casket, a band I've covered before, and will again soon with their forthcoming album. You can tell merely by looking at it that this is going to be some visceral, gore soaked, heavy shit, and I assure you that you will not be Rick Rolled, but that this is in fact as visceral, gory and brutal as the last half dozen slasher movies you watched which put a good portion of their humble budgets into some practical, sickening special effects. Whether or not that translates into memorable songwriting is up for debate, but if you're into this for the bloodspray only, I'm sure Cemetery Devourment will provide you with a little bit of entertainment.

The obvious comparison here is Mortician, not only because they include a cover of "Defiler of the Dead" at the end of the EP, but because there is a similarity to Will Rahmer's nihilistic guttural. The judicious use of horror samples here is a little overwrought since some of them go for two minutes or more, and aren't even that appealing at setting up the violent music that follows them. There is also a massive bass presence, not just in the plunking of the strings but the way the thick tone just hangs over the edge of the music so satisfyingly. But otherwise, there are a few differences with the New York goremasters, in that Formaldehyde doesn't come off quite as mechanical sounding or grindy. This is low-slung neanderthal death metal which comes at you with blasting precision or slows down into some of the thickest palm mutes and grooves I've heard the last few months. There are a couple spots that reminded me of groups like Ingested, only this band doesn't have any of the obvious deathcore connections, but just in how rich those chugs come across and how the production on them alone can bring a sick comfort to the listener even if the note choices are average.

As for the Mortician cover, it's fine...I mean half of the two-something minutes is a sample, but I doubt the originators would be dissatisfied with hearing a band pay them humble tribute. What I really want to hear from a band like this is just more musical, interesting riffs. KEEP those sick gutturals, keep the brutality, but just write riffs that pop off the background a little better. Maybe some virulent melodies, dissonant atmospheric chords, or a little more deviation between the blasts and chunky grooves. Bands like Katalepsy, Disentomb and others have proven that a little ambition can go a LONG way at this end of the extremity spectrum. Also, while I don't mind the samples, dial them back a little and make choices that are a little more sinister than just trying to relay us the sounds of carnage for most of their runtime. Those issues aside, Cemetery Devourment isn't all that bad for coming after a two-decade hiatus. It's got a cool looking cover, logo, total commitment to barbarity, and isn't the worst way to kill 20 minutes. They sound like they're having fun, and if you go in with the right expectations, there's a possibility you will too.