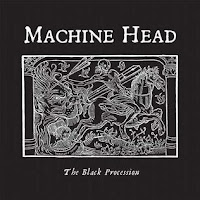 The Black Procession is a special issue 10" vinyl with three live tracks taken from the two studio albums before it, recording during their 2010 tour of the same name. One could probably forgive the scantness of its content, since like many Record Day releases, Machine Head probably just wanted to have something packaged up fresh for fans; a lot of these things are directly meant for the collectors' market, and here they chose to just sift through a couple tapes of their recent performances and make it easy. I do like how the cover artwork is consistent with The Blackening's classic, minimalist style, and two of the tracks are taken from the first of their albums I'd actually consider decent, but that's really all that I can say positive about the EP.

Though they don't sound terrible, the live mix here is a bit raw and suppressed, I felt like I was hearing it muffled through a tent at a festival...maybe if I was standing BEHIND the tent and they were on the other sides moshing it up with the crowd. You can still make out most of the instruments, but a lot of them just don't sound good. The vocals are not the best, but the backing vocals sound absolutely horrible. The leads are also kind of cheesy sounding and don't have the same impact that they do on the studio releases. Of the three tracks, "Bite the Bullet" probably comes off the most even, but since I don't like that song it's hardly some saving grace. And to be honest, the others don't do much justice to their own studio incarnations, so this is literally just some EP you'd want to file away in your record bin if you solely value its existence as a product that you can throw money at and add to another pile of similar products just to say you did.

And then when you end up having to switch houses, apartments, dorm rooms this all becomes a big fat burden to load up onto grandma's truck with all your rare wax and DJ equipment. That may or may not be true for you and your situation, but what is definitely true is this is a complete waste of time, even if it's just 17 minutes and change.