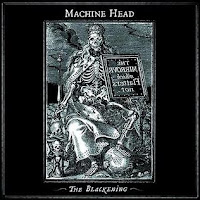 For all the ire I've cast upon Machine Head's recording history, there's no question that the band has been a successful venture, with plenty of profitable touring, media attention, and record sales, even well before Robb Flynn started letting a lot of sparks fly across his social media and interviews. Despite all the returns on investment, I'd like to pretend that, in the four years after Through the Ashes of Empires, when the band was throwing this album together, they came to realization that 'this was how it should always have been'. If The Blackening were the lead-in for the band's career, then it all might have made a lot more sense. I'm not saying this is a 'great' record, but it's certainly a decent one, brilliant by comparison to the long stretch of earsores the band had previously manifest. It's the first studio album that actually deserves even the hype wave they ever surfed in on.

It's evident immediately in "Clenching the Fists of Dissent" that a part of this turnaround is that Robb finally remembered he was a thrasher. In fact, he and Phil Demmel, who also plays here, were part of one of the greatest West Coast thrash albums ever crafted in Vio-lence's Eternal Nightmare, and you can clearly hear that sort of riffing influence being integrated up against the band's nu/groove stylings. Funny enough, when you throw in some neck-jerking, mid-to-fast paced thrash riffs before that moshpit focus group breakdown, it all feels more effective due to the powerful contrasts. I'm not saying that the band's lowbrow riffing fare suddenly becomes more interesting on its own, because there are plenty of effortless, lamentable grooves here, but The Blackening assaults you right up front with the competent upbeat thrash, walls of wailing leads and lots of other guitar atmospheres that dress up even its most mundane moments. That bridge riff feels a lot like something Metallica would have used on Master of Puppets if they were more into gang shouts, and there's just no questioning that this presentation is a more musically ambitious and rich experience regardless of what flaws it carries forward from their garbage daze.

Don't get me wrong here, this isn't a conscious fuck-you turnabout album which ignores the past; you're still getting a big chunk of Pantera worship, but I heard all manner of influences going into this one, from the Mike Muir-like 'emo' vocals of "Beautiful Morning", to the Tool-like structure of groove built into the verses of "Now I Lay Thee Down". You've still got a healthy heaping of those masculine radio rock chorus parts dominating the 'hard rock' channels since the mid-to-late 90s, but even there Flynn manages to string together some slightly more memorable lines and melodies than what you might expect from earlier records. His aggressive barks and roars are still heavily rooted in that whole Phil Anselmo/Skinlab/Pissing Razors style with a dash of generic metalcore angst, and they're for me one of the weaker parts of the album, outshined in almost every instance by the music itself, but I'd happily have this invade my earspace above nonsense like Supercharger or The Burning Red. The musicianship is by far the strongest they'd managed up to this point, and even though there are still a good percentage of pretty dull riffs that hold it back, you'll be surprised by some of the things that pop up.

A couple of the tracks are pretty long by their standards, such as "Clenching the Fists of Dissent" or "Wolves", but I'd say they actually offer enough dynamic range within these to pad them out without lapsing into boring repetition, and perhaps more importantly, that good old thrashing spirit just keeps rearing its head enough, as if its an anchor that's holding the entire process together, and at this point in their game they couldn't have chosen a better focus point. A lot of the lyrics are pretty weak, but at least they don't come off overly goofy in conjunction with terrible music. I also liked the cover art aesthetics, the stark simplicity of the logo font with some classic religious imagery, preferable to all of the choices they made prior to Through the Ashes of Empires at least. Now The Blackening is not an album I'd pick out of a lineup of other material in my thrash (or limited groove metal) library, but if someone were cranking this in the car I wouldn't cover my ears or make a stinky face, I can give some credit where it is due and if this was the sort of passion for the craft they had been meting out since 1994 then I'd never have had cause for complaint. But can they keep it up?