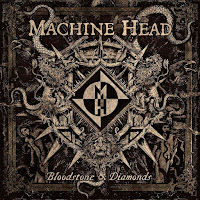 Bloodstone & Diamonds is not an album that abandons all the common sense, critical praise and good will that Machine Head had suddenly developed with The Blackening and Unto the Locust, but it's a solid step backwards in terms of quality, somewhat of a 'dumbing down' that shows the band for whatever reason missed what they were doing beforehand. You've still got a few outbreaks of the more agile, thrash-inspired riffing and some exciting lead sequences, but this one goes for grooves and accessibility a little more than the albums leading to it, and some of the aforementioned faster breaks aren't really interesting. I think if I were to condense it all down to about 3-4 tracks you'd have a worthwhile followup to Unto the Locust, but it's padded out with some songs that don't exactly leave any impression on me.

The catchier tracks like "Now We Do" and "Killers & Kings" are wisely staggered on the frontside of the album, the former a groover reminiscent of Through the Ashes of Empires era but with the add-on of some symphonic strings, and the latter a a thrashing 90s-style pounder with a couple frilly little riffs in there to keep it feeling busy. I also dug the melody at the beginning of "Ghosts Will Haunt My Bones", but that one kind lapses into the nu metal with rock chorus stuff that I was never a fan of in this band's hands, even if Robb's voice sounds half-decent on the more atmospheric, emo moments where he's festooned with little melodies. After that I find it hard to remember much of anything... "Sail Into the Black" is a pretty atmospheric track with some creepy little piano sounds and an epic length to it that eventually surges into giant rolling double bass grooves, but I feel like the harder hitting parts don't live up to the beginning; and "Beneath the Silt" is another track with some potential even though it's got a dirty chuggy nu groove beneath it, I kind of like the psychedelic filtering on the vocals, and again he's got some good singing parts on that and deserves a little credit.

The instrumentation is fine, with another of the band's stronger drum showings when they hit those grooves, and a lot of subtle percussive builds during a lot of the atmospheric parts of which there are probably more here than any other Machine Head record. Bass sounds good, production on the guitars is just the perfect contrast of heaviness and melody, and while Flynn is still doing a lot of the Phil Anselmo style tough guy grunts and growls, he's clearly improved all around. I also think that lyrically this might be the peak for the group, the lines seem fairly well thought out compared to some of the garbage on the disc to follow. The last third of the album is partly a waste of time, with the soft ballad "Damage Inside", the throwaway sample track "Imaginal Cells", and the other songs back there doing a mix of the Korn-like nu metal vocals with a few thrash parts to try and smooth them out, but all told Bloodstone & Diamonds isn't a complete dropping of the ball, it's still much better than anything the band had put out prior to 2007, and if you were a fan of the two previous albums then you might have breathed a collective sigh of relief. Maybe for the last time...