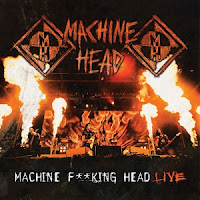 Nearly a decade after Hellalive, and a not unreasonable amount of time to wait for a band thrust so far into the spotlight, Robb Flynn and his Machine Head released a slightly more elaborate follow-up live effort over 2 CDs. While its predecessor was no slouch at 80 minutes of content, this is over 100 and allows the band to draw upon a bigger pool of material, including some from the two albums before this, critical darlings in many circles, which had seriously increased the band's stock even among the disbelievers who justifiably loathed almost everything they had released up to that point. In fact this is quite up to date for the year it came out, devoting fully five of its 15 selections to tunes from 2011's Unto the Locust, an album that only had seven songs to begin with...

Add in the trifecta of "Beautiful Morning", "Aesthetics of Hate" and "Halo" from The Blackening and you have more than half of an experience which might skew well above the suck line. Burn My Eyes, the debut and least shitty of their first five albums, has a pair of tracks in "Old" and "Davidian" which grants a little more stabilization. I think Overkill kind of saturated the market on the ol' F-bomb emphasis with Fuck You and Then Some, but I'm sure some fraction of the Machine Head market does appreciate the stripped honesty of Machine F**king Head Live! Like if I'm getting off the late shift at the meatpacking plant the night before, sleeping in late and then starting my boozing early, you're damn right when Robb Flynn and friends enter the stage with pyrotechnical wizardry and lots of chugging I'm a holler "MACHINE FUCKING HEAD!" at the top of my lung capacity. To boot, this album was a slight surprise in how honestly it captured the group's sound, in a more raw form than I expected...without too much polish anywhere, lots of crowd noise that can occasionally even compete with the instruments, and a solid and substantial performance.

If you were at this performance and felt its energy and sincerity, you'd probably be aboard the train, at least for a couple hours, because they knock it out of the park. At least the UK fans at Manchester Central seemed to think so. The more metallic, musical material from the albums leading straight up to this glows in venue, with great dual harmonies, melodic chorus parts, thundering, precise drums, surging thrash breaks and a nice bass tone giving everything that much more punch. The leads as in "Be Still and Know" are a lot of fun here and the band sounds so much more on point than anything I've forced myself to endure through the 90s or earlier half of the 00s. Some form of professional and passionate equilibrium had been achieved through all its trials and tribulations and that reflects right back out through the product to the fans. As much as I don't like their bouncier nu metal material, just being in the presence of better tunes here almost makes it more tolerable, so I could listen through a jam like "The Blood, The Sweat, The Tears" or "Old" without needing to turn it off. Ultimately I think this is one of the top three Machine Head releases, and even though it's not one I'd ever personally break out with all of the gajillion options available to me by bands I tend to enjoy, I could fully understand why any would sing its praise. It crushes Hellalive both in the stronger selection of songs and the aural impact it leaves. They showed up, they gave a shit, they performed well, you got what you paid for, and for at least the couple years leading to this, they mattered.