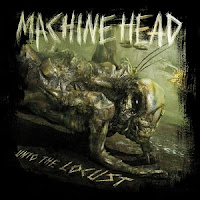 Unto the Locust takes the thrashing energy and ambition that the Machine Head crew resurrected from their earlier years as musicians onto The Blackening, and then ramps up it a notch by armoring it with a more modern sensibility and an obvious increase in overall heaviness. I wouldn't stay that there is as great a stylistic disparity here as between the two albums before it, or between Through the Ashes of Empires and Supercharger, but this is far from a repeat of their 2007 surprise. Tempos, dynamics, and riff patterns are explored more interestingly, and I'd say that the thrash riffs in particular, on tunes like "I Am Hell (Sonata in C#)" and "Be Still and Know", are more nuanced and memorable than those from the previous album, even if it set a sort of standard to follow.

Most improved for me on this album would be the vocals, which are more often given multi tracks or harmonies that strengthen them far more than just listening to Robb's delivery before. This is most felt in the chorus parts to tunes like "Be Still and Know" which are genuinely catchy, but you'll often hear this being done on various verses, so the distribution keeps an added intensity throughout the lion's share of the 49 minutes of material. Though you're still hearing a couple of grooves here or there, Unto the Locus really strives to maintain an air of respectability, and I could honestly say this one might impress fans into groups like Nevermore or Savage Messiah, even if they've had no interest in anything Machine Head had gotten up to before. It's not terribly technical, but it's hard hitting, half-intelligent and interesting. Other little nuances I heard hear were similar to bands like the French groove juggernaut Gojira, at least in some of the vocal delivery and picking patterns, or even Strapping Young Lad in how the vocals carry or the post-modern thrash atmosphere. You can also clearly hear a huge melodic Swedish death metal influence on tunes like "This is the End", and it's honestly not unwelcome because it's performed with the surging testosterone that fuels a lot of the better efforts from a Soilwork or Dark Tranquillity.

This was the best drumming Dave McClain (ex-Sacred Reich) had done on any of the Machine Head albums during his tenure, thundering and muscular and definitely making as much a statement as almost anything else on the record. The bass is solid and gives the heaviness much of its weight, and the lead guitar supply on this is simply inexhaustible, it's the most melodic album they've put out, but without losing the ballast it desperately needs to keep its groove-oriented audience in their seats, or out of their seats, kicking each other on the rump and flailing their inebriated limbs about. There are a few weirder progressive experiments like "Darkness Within", and you can get the impression that they were expanding themselves to see what would stick, not succeeding 100% of the time, but as an album emerging upon the popular metal landscape of 2011 I think this is probably the one most suited to its times, with the most weaponry to help the band compete with their often far younger peers in the groove, thrash and metalcore niches.

The lyrics are still a sore point, especially on tracks like "Who We Are" or "This is the End" which have all the artistry and cliche parades of angry teens, but let's face it, the overwhelming of majority is like this and those who accepted and enjoyed Machine Head's earlier material are not going to care one way or the other. Hardly embarrassing, just showing little to no thought as the lyricist just pulls the most obvious and basic images from the mind to the page. Otherwise, this is the best album in the Machine Head catalog, or the most 'worthy', still hovering below greatness, but a galaxy beyond some of the turds they've committed to tape before it. Not that this is in any way some mandatory band to experience, but if we reduced their career down to The Blackening, Unto the Locust and Machine F**king Head Live, it wouldn't belong in a dumpster. Of course, that's not the whole story, that's not reality, but 2007-2012 was clearly their peak and I can't formulate too much negative to say about it.