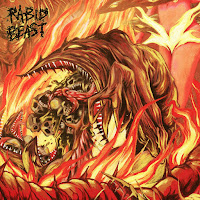 Rabid Beast is the metal passion project defined, a pairing of longtime thrash fans who have made their way in other styles, but could not forever resist the siren call of a prime inspiration, and thus decided to do something about it. In this case, it's the duo of Paul Gillis and Eric Bauer, who have played together before in Chicago's brutal Morgue Supplier, which might explain how they work in such lockstep across four of the most intense thrash tunes you're going to hear in 2020, and a pretty nifty cover to boot. The Rabid Beast EP presents us with around 24 minutes of what is sadly lacking in most of the re-thrash of the last few decades, or even the releases of many of the genre stalwarts, that is, the ability to sound and act absolutely psychotic and capture it on tape.

The foundation here is very meaty, mute-heavy, forceful thrashing which has a richness to it that reminds me slightly of another Chicago thrash act, the legendary ZnöWhite, in particular their criminally underrated 1998 album Act of God. But there are also traces of Devastation's Idolatry; or Destruction's muscular riffing, old and new, with a little bit of a clinical melodic edge ingrained in there that you might trace back to Release from Agony or Pestilence's death/thrash debut Malleus Maleficarum. Though the focus is on momentum and heaviness, there are some dynamic, textural, dissonant patterns which emerge from the more straightforward riffing to even remind me a bit of some of Voivod's later 80s experimentation. A lot of my favorite things, of course, and the riff set here is truly devastating, lots to hook you in tunes like "Decline into Disorder", "First Among Equals" and "Green Room is Red". I found the lead guitars a little less consistent, they're fast and furious, spastic and crazy, but while they really stood out in "Green Room is Red" or the great shredding in Infernal Majesty's "Overlord", I found them a bit flimsier in "Decline into Disorder" where they couldn't really match the intensity beneath.

In addition to that chopping, powerful rhythm guitar tone, the other standout here would be the vocal style of Mr. Gillis. Like in Morgue Supplier, or his other group Drug Honkey, he goes above and beyond to create something that is at once familiar and over-the-top unnerving. He uses both the force and frailty of intonation to manifest a tormented hybrid of splatter-thrash and Germanic precision, one that you can never get too comfortable with because he might hurl some crazy ass, unpredictable lines at you that go further out than even that description. The benefit here is that this is something YOU WILL ALWAYS REMEMBER. Cookie cutter thrash vokills from bands like Evile or Warbringer are competent enough, sure, but the reason I'm always going to turn towards a Rabid Beast, or Sweden's Antichrist, or Germany's Vulture instead, is because they sound absolutely sick today, they'll sound sick tomorrow, and they will sound sick in 20 years. It's the same reason vintage Tom Araya, Bruce Corbitt and Jeff Becerra still stand out now, they capitalize on and weaponize the flaws and imperfections of the human voice to create a sense of genuine danger.

The rhythm section here is as tight as necessary, and the lyrics range from thoughtful and relevant ("First Among Equals" or "Decline into Disorder") to outright hilarious ("Green Room is Red"). The cover track here is performed with more intensity than the original while managing to seamlessly absorb it into the Rabid Beast sound. Very little to criticize here, this is easily one of the better new thrash EPs I've heard this year alongside Voices by Belgium's Schizophrenia, vicious and sincere, and I highly recommend getting in on the ground for the whirlwind it will inevitably kick up.