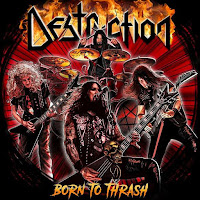 Destruction's live offerings have been a series of diminishing returns for me. The first, Live Without Sense, was excellent, one of my favorite live albums of the 80s, and one that I probably listened through just as much as any of their studio outings, at least for a few years after it came out. Later recordings like Alive Devastation and The Curse of the Antichrist - Live in Agony were nothing to necessarily scoff at, but comparatively didn't excite me enough to keep on revisiting them when I was instead in the grips of so much other new metal, or couldn't really be pulled away from their 2001 opus The Antichrist which to me is still marvelous. Born to Thrash is a pretty humble 10-tracker from a band that could just as easily produce a 2-3 disc set, but the idea I think is to get back to basics and so we've got material that was recorded at a single gig, the Party San 2019 fest from their home country, where I'd like to fantasize thrash metal is like the morning newspaper, only several Germans I've spoken to say that instead it's all bad techno and Volksmusik...you probably know more about that than I do, but please refrain from screaming with your keyboard until this review is done.

The track list is pretty well distributed between oldies that everyone in the audience will love ("Total Desaster", "Curse the Gods", "Mad Butcher", etc), a couple of their early 21st Century hard hitters, namely "Nailed to the Cross" and "Thrash Till Death" from my fave mentioned above, and then they give you some more current material in "Born to Perish" and "Betrayal" from their most recent studio album, Born to Perish, which was pretty good. It's a crowd pleaser set with just a few reminders that 'Hey we still exist and hit the studio fairly often!'; and when you're in front of a huge festival crowd you're going to go for maximum impact, which I think these choices pull off for the most part. Now, maybe coming at this record as a fan of 35 years who owns all the band's studio CDs other than the embarrassing Neo-Destruction years, I could make an argument that if I'm expected to plunk down $10-15 for this that I'd appreciate a more elaborate package, maybe getting the chance to hear a few discs worth of their lesser known tracks in the live setting would heat me up a little more, but that's not going to spin the wheels of commerce for most potential buyers or ping the label's green light.

This is the two-axe-attack Destruction with Mike and Damir delivering an appreciable crunch, and their dextrous playing and the spurious leads all sound pretty good, but perhaps not as beefy as I'd like, just a grade too low when sent up against the driving beats of skin veteran Randy Black. The bass thumps along well enough but I feel like it could also have come out in the mix just a little more for the perfect balance. Schmier's vocals still sound as uncouth and savage as he's always been known for, perhaps even a little wilder here than on some other performances I've heard, and that might or might not be the result of his aging pipes, but it still sounds like a thrash metal band ought ta be, and he has great stage presence even in audio-only form as he's introducing cuts like "Mad Butcher". The reverb and effects on his vocals are great, especially when he has to pitch out one of his screams, and they help it seem more psychotic and memorable. All in all, a very workmanlike, effortless set from guys that have been this so long that they should probably be able to juts plug amps into their veins and the songs would still play with no other instruments. It's a good live album, not trumping Live Without Sense, and not likely to draw me away from their studio work, but dependable.