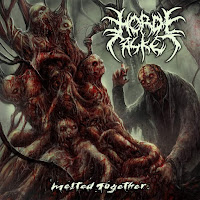 I think brutal death metal has to be one of the most difficult, if not THE most difficult sub-genre from which to standout. There's such a mechanical demand for some of the musical tropes common to the niche, and bands like Horde Casket do their best to fill these in, and if I were judging simply by a checklist, then I'd stay they fill in or obliterate a whole lot of those boxes. Ridiculous blast beats are all over the place, as well as hyper chugging and dextrous little hand exercise riffs that must clearly tax the players' tendons after a rehearsal session or live set. The vocals are their normal mix of harsh guttural and harsher rasp, in the tradition of your Carcasses and Deicides, and the overall momentum of the album is utterly fucking relentless with a slightly noisy mix that is like to give you a headache if you're just not attuned to what you're normally going to get out of the genre.

The issue at hand is that, with all of the obvious physical temerity and extremity that they are pouring into this release, it almost entirely fails to stick. There might be a few tricks up their sleeves like the walls of wailing guitars they bleed over the thrust of "Nocturnal Transformation", or the broken chugs below the inhuman blasting of "Disease of the Deceased", but it's usually just business as usual from a band that has always hovered between average (Bloodfiends, Landscape of Cadavers) and decent (Xenopocalypse, Slab of Infinite Butchery). I like the frenzied pacing of the leads, they always give the music an added sense of death metal escapism, and if you like the choppy slamming rhythm guitars matched up against non-stop pounding drums, there will be moments for you to get your dance on. There are some really great growl placements here that resonate, but just not consistently, and across all departments, Horde Casket doesn't lag behind much of the competition, but this is assuming you only want the methodical brutal death metal...

I honestly think the band could slow down or de-escalate itself once in awhile to create a greater dynamic punch to it, maybe throw in a less discordant whipping lead guitar, or make a crunchy groove riff that is actually catchy, where the listeners will get hooked to the chord patterns. Like so much of the brutal death metal, this one looks so bad-ass with its cover art, song titles, the band's name has always been pretty cool, but I fear that this stuff has become so commonplace that it just lacks a genuinely evil punch due to its mathematical commitments. If you are mining the rosters of Sevared, Pathologically Explicit, New Standard Elite and Unique Leader and like most of what you hear, then Horde Casket is unquestionably worthy of your time, but this one didn't leave me with much to remember afterwards other than the bruises.