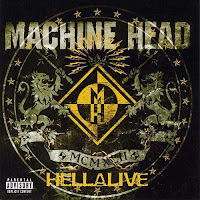 Machine Head's first proper live album came about a decade into their career, more time than some superstars wait for sure, so one can't really hold their feet to the fire for wanting to get a substantial studio backlog behind them before trying to sell such a product. It features a pretty even distribution of material from the four albums they'd put out before it, but that just means almost all of it is going to be really, really bad. You've got your 'crowd pleasers' like "Old", "Ten Ton Hammer", "Take My Scars", and...okay, I'm sorry, I just can't keep a straight face while trying to type this sentence. Let's cut to the chase: Hellalive is a terrible live album, but it's terrible for its content, not AS a live album, if that makes any sense.

Technically, it's passable in most respects. The guitars and vocals are pretty level, and sound at least as good if not better than their studio counterparts on many riffs. They go for a more straightforward sound on stage, you can still make out some of the guitar effects and subtleties of the studio work but it hits much more like a blunt object. Although Robb is trying to represent the range of trite emotions he brings to the studio, he's a little dumbed down on the delivery through this set and that's actually a good thing. Apart from whisking off into some of his clean-cut jock chorus parts, he doesn't sound as laughable as he's done on a few of the albums. Then again, some of the drifty, dreamy melodic mouth breathing he does on tunes like "The Blood, The Sweat, the Tears" sounds a little dopey and it's on a part like that where you can hear more effects on the voices. The bass isn't quite as fat on stage here, so the tunes do lose a little bit of depth, but the drums make up for it with a little more fiery energy beneath them.

It's not a pure proper live set because a few songs are yanked from a second date in Germany and added here or substituted for the UK gig, but a lot of live albums do this and its all for presenting to the fans who want a more seamless listening experience and maybe cutting out a few awkward flaws. As live records go, this one does a fair representation for the band, I cannot imagine a longtime fan of Machine Head in 2003 putting this in the car stereo and feeling let down. They pound on you with a lot of their cheesy groove metal songs and leave enough space to get their emo on too. But I simply cannot reconcile with this shitty music, because I do not enjoy what I'm listening to. Is this a better experience than Supercharger, The Burning Red, or the More Things Change...? Yes. Does it bring hte pain? The siccness? If you're 11, yes. Is it worth checking out when there are literally tens of thousands of better albums and better bands across every niche of the metal spectrum? Hard no.