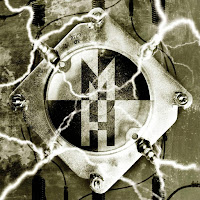 There's about a minute in the first proper song here, "Bulldozer", after the pointless and uninteresting "Declaration" intro has ended, where Machine Head breaks into what sounds like it could have been a half-tolerable thrash/hardcore riff section, and I'd love to say that it almost fooled me into thinking I might be in for a sea change from the two miserable full-length albums previous. But I gotta level with ya, I don't fucking trust this band at ALL to write anything of quality, so sure enough, within seconds, that same song unraveled into an unkempt amalgamation of Korn, Rage Against the Machine, Limp Bizkit, Linkin Park, and God Hates Us All era Slayer that reassures me that Supercharger is in no danger of breaking the stink-streak that preceded it.

I could say a couple positive things about the production. The way the guitars and vocals here are produced is a little bit more edgy and cutting than the last album, and Robb is settling into his multiple vocal stylings a little more with each album. Unfortunately, all of those stylings are really lame even by 2001 standards. His rapping has gotten a little more dextrous and sounds like an actual attempt at rap, perhaps, but then it's all about laying on the angst and the nu-metal rage, once again a mid-90s Jonathan Davis with far less personality, or a try-hard Mike Patton, and both the lyrical content and delivery feel shallow. What's worse, he's obviously going for those cliche radio rock chorus tones and patterns that feel like he's trying to get Machine Head recruited for an 'Army of One' ad on TV, like they're trying to peddle themselves as my friendly local neighborhood Godsmack, a band that I must apologize for my neck of the woods (Southern NH/Northern MA) ever producing to plague your ears. But, be real, it's not as if Flynn's goofiness is any better.

The annoying vocals would be one thing, but the vast majority of riffs here are just pathetic, yet again bouncing back and forth between a couple chords that require no imagination whatsoever, just to cling to the grooves that the fat bass tone is laying out, which sound good studio-wise, but are really just as awful once you dissect them. I'd say Supercharger is slightly more technical and dynamic than The Burning Red; you will come across a couple riffs that have a genuine energy flowing to them, and they use a lot more guitar effects like wah-wah sounds all over the place to make this sound like much more of an organized mess, but any attempt at validity is ruined by the shitty commercial radio vocals and the obnoxious pandering that this album constantly gets into. This is 'metal' by numbers, the lowest common denominator kind, trying to cash in on the audiences of emotional rock and angry wallet-chain Lollapaloser mosh. Any time any rhythmic maneuver comes close to engaging my brain, it's almost instantly shat upon by a quick morph into the tedium that I've described above.

It's very clear that Machine Head were trying to follow the Korn trajectory around the turn of the century, with a lot more soft atmospheric parts contrasting against bleaker emotional outbursts, and Robb was also trying to get a decisive, pointed delivery to his chorus parts that David of Disturbed always had ("Only the Names" is a textbook example of all this). But that's the problem, we already had those bands, and this one did absolutely nothing as well as any of them. Not that I'm asking you to listen to them instead, I could probably count the number of metal albums I enjoy on a single hand with a missing thumb, but this is just more also-ran rubbish that time will swallow up, even the fans of Machine Head's earlier output don't seem so enamored with this one, and it doesn't take a degree to understand why.