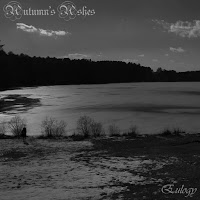 Autumn's Ashes is a collaboration between two New England musicians, Dan Saillant of Annihilus Mundi and Rick Lowell of Blacksoul Seraphim, backed by a host of guest musicians, and what I found most compelling about it is how it brings the strengths and versatility of those other projects into a broader sea of influence from which it draws its ideas. You've got a mix here of traditional, trudging Gothic metal riffing within some progressive death/doom structures, and then some graceful, mildly symphonic aesthetics which are created largely through the pianos. The band is not above incorporating some minimalist acoustics for atmosphere, shifting between a number of vocal styles, or adding in some proper lead guitars for yet another potential dimension to their sound.

Musically, I thought the material was consistent, with moody, driving guitars that gave me the impression I was living in these bleak, natural landscapes like the one depicted through the cover art;  maybe a gleam of sunlight off the frost or lake-ice surrounding me, in a way reminiscent of groups like the mighty Amorphis during their Elegy-and-beyond era, or Draconian, or perhaps Anathema during their sparser, acoustic moments. The pianos pile on a lot of melody to the steady guitars of "Vanished", which has a nice pickup pace for the lead and bridge, and "Reason" is a 9 minute progressive doom beast which had a few hints of Dutch death metallers Phlebotomized, where you couldn't exactly guess what was coming around any corner, and were once again treated with an eerie effect in how the spectral pianos interact with the low end guitars. The mix is fairly decent for something essentially demo-level, at the very least you can hear the bass, drums, guitars, keys and vocals distinctly from one another even if it overall comes across a little murky. I had mixed feelings on the instrumental pieces. "Down the Road" was pleasant with its pianos and synth pads, but I don't think it set up "Vanished" quite well enough, whereas the resilient organ piece "Up the Stream" was well done but perhaps a little too brazen for its placement on the EP.

Vocally, I think Eulogy has its share of ups and downs. The gutturals are fantastic, with a lot of punch and ugliness to them that sounds awesome when the guitars are chugging along below. Haydee Irizarry of Boston's Aversed provides some silky, cleaner vocals to the closing track "Shutter" and they created a hazy, compelling contrast to the heaviness. It's the clean male vocals on "Vanished" and "Reason" that I wasn't entirely sold on. I like the crooning, desolate style they're going for, reminiscent of groups like Yearning, and some lines are delivered better than others, but occasionally they felt like they lacked confidence. There were points in "Reason" where they got a little awkward, especially where the higher pitched screams came in behind them, or how some of the trailing off at the end of the verse lines wavered in fluidity. "Vanished" fares better overall, but considering that these two tracks were the first metallic one-two combo on the album, that might be an area to flesh out better for future releases, with more power and presence.

I've said it before, but Gothic doom and death is all too rare in my neck of the woods, so it's a treat to hear a band like this or Blacksoul Seraphim giving it a go. Autumn's Ashes has a lot of potential, especially as a conduit for the autumnal or wintry nostalgia I have for this place in a metal context. There's a strong arsenal of weaponry built in here with the drums, gutturals, guitars and pianos. The intro and interlude pieces are fine, but don't really add much to the proper heavy material, and the melodic vocals are something to work on, but otherwise this is some solid ground to build off.