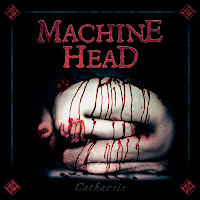 While on some level Catharsis pretended to continue the increased level of musical proficiency and effectiveness Machine Head had begun to achieve with a few of the albums before it, on almost every other level it's a dumpster fire. When I first put this record in, I got the impression that it was some group of 14 year old metalcore kids who had picked up a copy of The Blackening and decided to pay it tribute along with with a little Killswitch Engage and maybe a handful of their favorite melodeath bands. The cover art looks exactly like something they would think of. The lyrics are beyond dumb, puerile translations of whatever Robb could look up on the news to become outraged that morning, and the music, while fast and often fairly adept in technicality alone, rings hollow on almost all fronts and is immediately forgettable. Whatever steps towards maturity and memorability the Californians had taken with their material starting the previous decade seemed to have now been sidelined for what is worth little more than soulless dreck. I bet Nuclear Blast was pretty thrilled when their lucrative new contract shat this one on their second outing.

For whatever reason, Machine Head seemed to bring back a little too much of the pure nu metal nonsense on cuts like the titular "Catharsis"? No matter how much you try to dress it up with that emotional soft pop side, once that groove comes out I feel like I'm stuck in a room full of dead air and ideas that were never that interesting the first time this band failed at them. The Pantera influence is also here in full force once again, and it's even funnier when they mix in their rap metal stuff as with the track "California Bleeding", one of the dumbest fucking songs I've heard while writing this blog, which no dirty rock & roll chorus is going to save. Other songs like "Triple Beam" are just dumb pandering grooves with bad hip hoppy verses and then tasteless early 00s alt rock chorus parts which the band must think is going to help them sell records. And maybe that's what happened, and I'm a grumpy old dude who is out of the loop, but personally I've never met anyone with a single positive thing to say about Catharsis. One other irritant here is that the band clearly had a hard on for the pop-infused hardcore & metalcore we were hearing out of both the US & UK 5-10 years ago, and you can tell by the light synth touches they throw into cuts like "Catharsis" and "Kaleidoscope". Say what you will about those bands, they pulled it off better than this one can.

Of course, Robb had to spread his bleeding & beaten wings a little further here with "Behind a Mask" or "Bastards", which sound like some dopey acoustic track Aaron Lewis of Staind would right...but what the latter grows into, some weird anthemic fusion of The Dropkick Murphys and the Beatles, in which Robb tries to embrace minorities into the Machine Head fanbase while dropping sarcastic slurs at them, is the sappiest 'what the fuck' moment I've probably heard from any of these high profile nu metal bands. 'NO NO NO, NO NO FUCK NO, NO NO NO!' Do you want a Machine F**king Head High Five for your pedestrian protest anthem? 'GET YOUR MIDDLE FINGERS IN THE AIR AND SING, THEY CAN'T IGNORE US ANYMORE.' Reading these lyrics makes me feel like I'm in the midst of the rave scene in that Matrix sequel, only with worse music and surrounded by a bunch of edgy caricatures of cartoon PSAs with their capes flapping around in Robb's posterior wind. I'm all for people expressing social and political opinions that they feel strongly about, don't get me wrong, but try to do it with a little tact and nuance rather than overt cliches, condescension and reductionist stereotypes that do nobody any good.

To be fair there are other themes here being tackled with more personal, less obnoxious lyrics, but even then you're guaranteed to have some extremely weak musical idea fouling up whatever rare catchy bit they might have accidentally stumbled upon. There is approximately one song here, "Heavy Lies the Crown", which would actually be a half-decent mid-paced Swedish melodeath tune if it didn't have Robb's vocals or lyrics anywhere near it. The production is fine, the boys can still play, but ultimately, Catharsis is just one goofy, convoluted mess that feels half Midlife Crisis and half I Wrote These Songs in My Garage While Inhaling Carbon Monoxide Because I'm Too High to Realize That I Left the Engine Running. It is, for my wallet, the worst Machine Head studio album, and I'd rather have all my body hair peeled off with masking tape while being forced to endure The Burning Red and Supercharger before ever listening to it again.