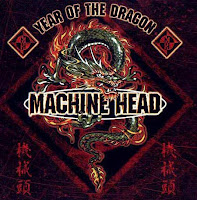 Here's another Machine Head EP which was released in a few territories, presumably to sate the demand for more recorded live material and rare 'demos' that I can't imagine anyone actually ever having asked for in there lives. That said, it's possible that even Robb and the band didn't give a shit about this, that it was some sort of record label promotion to keep them on the shelves at the shops, or in radio rotation, or whatever crappy music industry justification for wasting natural resources on dumb material products. But unlike the Take My Scars EP, which had a mediocre Nirvana cover on it, Year of the Dragon has no curiosities whatsoever, just churning out the most generic short-playing fan cash-in possible, with one demo track that might make it a collector's item for collectors of trash.

"The Blood, The Sweat, The Tears" is the 'single' here, and it's presented in both its lame studio rendition, and one of the three live tracks that were recorded in Connecticut in 1999. It's following up after 3-4 other singles from The Burning Red album and one they put out for the Heavy Metal 2000 movie, which honestly baffles me, that any of the material could be considered good enough for air play... I mean, I don't know how anything by New Kids On the Block was ever considered quality, but they wrote better songs than these. At least I'm assuming...I wouldn't know much about that ::as he hides his copy of Hangin' Tough where you'll never find it:: The live songs are among the worst possible, between "The Blood, The Sweat, The Tears" and the awful "Desire to Fire" which is just possibly the most cringeworthy track Machine Head has ever produced in their mostly miserable catalog. "From This Day" isn't much better, it literally sounds like Limp Bizkit with a slightly heavier groove where he tries to do commercial rock vocals for the emerging Nickelback crowd.

The live tunes aren't recorded quite as well as those from the prior EP, but I suppose they are loud and brash and not as badly mixes as some I've encountered. So I'll give it a point for that, since I can't justify any of the musical value whatsoever except maybe the little 'HEY SLAYER GUYZ' riff that comes up late in "From This Day". "New Resistance" is the demo track closing out the EP, and I have no idea if this was something which was later reworked, but it's a horrible track that sounds like it belonged on The Burning Red or whatever Disturbed was writing at the time, there's a little bit of David Draiman in the vocals on that one but then again this wouldn't be the only case of that, the difference is that Disturbed has had the gall on a number of occasions to create memorably annoying songs, whereas Machine Head throughout the 90s just opted for the latter half of that equation.