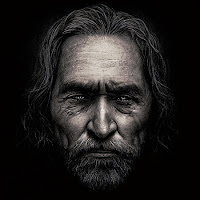 The Pénitence Onirique debut V.I.T.R.I.O.L. back in 2016 might not have completely won me over, but it was unarguably a wall of ebullient, shining black metal force which approached from an interesting angle a genre which is too often defined by convention or cloning those to come before. Granted, there is a backbone of traditional atmospheric Euro BM behind what the Frenchmen are writing, but the unending wall of sound created by the guitars and vocals gave it a fresh feel without quite teetering off into that boggy stretch of the medium we characterize as 'post-' anything. Their new album, Vestige, might not possess such a transcendent look to it on the surface, but I found the subtleties and variation here a fraction more enjoyable than I found its predecessor.

The pacing here shifts between surging, blasting black metal textured with repetitious, higher guitar patterns that are constantly saturating the upper atmosphere of the album with an ambient or post rock flavor, and then more measured, longer pieces which accomplish much the same but through a more stolid, doomed approach. On occasion the band will drop out the beats and just let some of the melodic pickings ring out, and it's glorious, the entire album feels like this tide that is going to drown you, release you, and then drown you again. The vocals are primarily molded in the traditional rasp that was also dominant on the debut, however they'll throw some cleaner chants, howls and even some more brutal guttural vocals in there just to increase the diversity of emotions they can flatten you with. They don't repeat themselves too often rhythmically, I mean the blasted stuff is probably one of the higher percentages but even in that you'll hear little differences in the drums or the fabric of the guitars being woven above them that help distinguish them a little, even though as a whole the record is incredibly fluid and coherent. Drums are intense, bass lines are solid even if they don't really poke through the desperate mass of sounds above them.

Now I think, atmospherically, Pénitence Onirique has its style on lock, and there's a certain segment of the modern black metal fandom which just wants that snarling intensity measured up against a more shoegaze-like panoply of chord options who really aught to check this band out, and in fact to that same crowd I say also track down V.I.T.R.I.O.L. One area in which I still think the group can grow, however, is by writing catchier guitar patterns...while I love the sonic half of their approach, there aren't a lot of guitar licks here that truly wanted to draw me back towards the album. Even the instrumental 'interlude' piece "Hespéros" felt like it was just sort of drifting there, a fine backdrop for a morning rise from bed with the sun glaring upon your brown, but not possessing any inherent note patterns that stuck with me, no infectious melodies embedded in there. It's all just sort of competently crafted emptiness that suits an emotional notion, almost like incidental music, and there's a place for that, surely, but it still lacks the hooks to become much more.