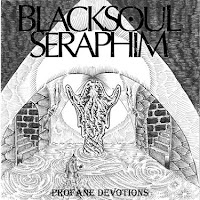 Blacksoul Seraphim has been honing its brand of Gothic doom for years now, often infusing it with other of their influences like black metal, so the latest release, Profane Devotions comes as somewhat of a stylistic surprise. The band has stepped somewhat out of its comfort zone here with a focus on groovier, traditional doom riffs of the more direct Sabbath variety as channeled through their prodigies like Trouble, Pentagram and the like. That said, they haven't committed entirely to this edgeways evolution, retaining a lot of their core characteristics like the deeper male Gothic vocals, female backing vocals, organs, keyboards, and the polished, rigid, professional production style which is honestly hit or miss when you're exploring a more dirty, down to earth spin on the dooms so heavily prevalent in stuff like stoner rock. Again, this is not exactly trying to journey that far away from the band's earlier output, so what you're left with is a unique contrast.

A lot of pros here, but a few cons for me. The rhythm riffs are well-written and catchy, especially in "Doom Junkie" and "Bedlam Harvest", evoking that primitive, bluesy savvy you can trace back to the late 60s and 70s as Iommi and company were hitting their stride. Familiar, perhaps, as progressions of this style often are, but even then I think Blacksoul Seraphim does a damn fine job of keeping the actual structures of the verse riffs into chorus or bridge sections compelling enough that you can tell they've paid attention to how these mechanisms function and then translated them into their own tongue. Much of the musicianship is good on the whole...the drums keep the both the grooves and the choppier start/stop patterns in check, the bass sounds good and fat in the mix, and the way the synths are layered in against the riffs and vocals is balanced just right to enhance their power without any threat of intruding or outshining what is most important. The mix on the EP is quite good, which is no easy task when you're blending together the varied vocal styles and instruments here. It might even be too tidy, but again this band is not intentionally trying to sound as throwback as a lot of their peers, so there was little chance this was going to sound like a scratched vinyl from 1968 in a waft of cigarette fumes.

The lyrics are also quality, which is old hat to these guys, a mix of introspective despair as well as the hovering Lovecraftian influence that has long fueled them (and their former project Sorrowseed). But where I started to disconnect with this material is in the vocal choices. Now, to be clear, none of the vocals here are actually bad at all, if I were to isolate them from the whole they'd sound fine. The shouted, higher male vocals in "Doom Junkie" were quite good with the music, and where the male and female duet vocals were pretty well done. However, I just didn't jive all that much with the lower vocals over these groovier riffs...in the past, when the band was playing with a more stolid, Gothic architecture to the songs, these fit more smoothly, but here they tend to drag down the grooves. I also wasn't a fan of switching over to the female lead vocals on "Priestess of the Deep". I reiterate, it's not that the voice is bad, or out of key, but somehow they seemed too constrained, too safe over the riffing, where I would have liked to hear her go a little wilder, which she actually does closer to the end of the song, enforcing my point. One other nitpick for me was that the lead guitars were a mixed bag, especially in the bridge "Priestess of the Deep" where the solo felt a little too sporadic and didn't go anywhere special musically.

In fact, apart from the core riff during the verse, and the decent lyrics, I just wasn't all that into the second song. Not a deal breaker, mind you, but it just stuck out a little in an awkward way. Ironically, if you were a fan of their earlier albums Alms & Avarice and Hymns for the Vanquished, you might actually dig that one the most. I was, but I didn't, and overall it limited my enjoyment here. Now, to be clear, this is not a full-length, but an EP which is dipping its toes into the waters of another branch of the genre they original set out to explore. Not a massive departure or experiment, but enough of one that some growing pains could be expected. To that extent, I think their riffs prove that they're capable of wrenching out those soil-encrusted doom roots. I was nodding my head appreciatively through almost all of them. But I'd like to hear them go dirtier, crazier, more hazy and psychedelic, soul hammering. A little less of that meticulous marbled Gothic structure and a little more raw, devolved freakout would go a long way with this strain of doom.