In Shadows and Dust - Enlightened by Darkness (2018) 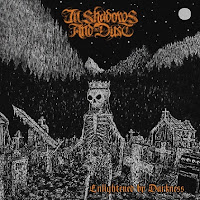 A one-man French act with four full-lengths under his belt, this latest, Enlightened by Darkness being the first released through Redefining Darkness here in the States. Like a lot of solo projects, the sheer magnitude and effort are difficult to deny, and I have to complement In Shadows and Dust on walking such an exact line between both the black and death metal genres. You hear a lot of groups identify with both, but here it's literally infused equally with both. Grinding, ugly rhythm guitars that can either brutalize with old school aggression or create some tremolo picked nightmares, a vocal style that kind of falls on the rasp side but can have a lot more of a flesh-ripping tear to it. Blasted drum patterns that live up to both extreme deathgrind and hyperblasted black metal.

To be honest, the album gave me kind of a headache, due to the density of the production. It also obscures a lot of the riff patterns to the point that I wasn't too excited as I couldn't pick out a hell of a lot of interesting chord progressions. On a tune like "Revenge", the project is clearly just aiming to pummel the fuck out of you...sure, there's a dim melody that erupts deeper into the track, but it's all about savaging and slaying, and doesn't care how it arrives at that grisly victory. While I can't deny that there is an angry personality to the record, and a tangible corpse rending atmosphere, I cannot say that it had much charisma that I would latch on to. The vocals are a little boring, the mix of the guitars is so grimy that there were just too few good parts for me to latch onto. The only stuff I was really feeling were those points I mentioned where there'd be a fraction of a melody spit out over the thundering turmoil beneath, and occasionally, as in "Dawn of a New Day", those types of moments would feature more prominently over a good chunk of a tune.

Of course, putting this all together deserves some accolades, because it's quite intense for just one guy, he's adept at getting the package assembled, if not so much with a production that could really deliver it home for me. The cover artwork is kind of fun, with a cool old undead king wielding his sword in a graveyard...and then what looks like a guitar pedal just...sitting on the side there. Looks like something suited to a proper, throwback death metal album, but this is only half that, since it really does blend in those mid to late 90s black metal influences so evenly. In the end, it just didn't stick with me for numerous reasons, but if you want something fast, dark, and meaty, maybe you're into old Swedish hybrids of the two styles, you might check it out to see if your mileage varies from my own.