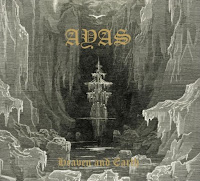 Armenia has had such a rough, tragic time of it throughout history that it makes for a potential hotbed for heavy metal of all varieties. Sadly, I don't hear a lot of material from this corner of the world, something I Hate Records has attempted to rectify with this highly elaborate reissue of what might be deemed a lost classic of the late 80s era, from a scene unfamiliar to so many. Ayas formed in the mid to late 80s, put out just one full-length and a demo, all of which has been collected here in a stunning, thorough retrospective which is wonderfully illustrated using a series of beautiful engravings made by Gustave Doré for Samuel Taylor Coleridge's Rime of the Ancient Mariner, and are strangely prescient towards the eeriness of this band's music, which with better production and distribution probably could have earned the status of a cult classic for that late 80s period.

I mentioned the production because it will probably prove a sore spot for those who don't know what they're getting into. The source material for the original album, Yerkink u yerkir, obviously didn't have a huge budget, and could hardly even be considered demo level even for many European bands of that era. The synthesizers are quite loud, overwhelming the atmosphere that they contribute so much to. The drums are really splashy on the high end, and weaker on the low end, not able to imbue the guitars with a lot of power. Speaking of which, the tone of those guitars seems a little heavily processed. You can make out most of the notes, which is good because these guys had a lot of killer riffs, and reliable if not exemplary leads. The bass hums pretty low in the mix, but it's audible as a shadow flitting along under the guitars. Vocals also lack some power, employing a very workmanlike ranting intonation that doesn't rely so much on melody or chorus hooks, but almost a more punk-like edge to it with some screaming thrown in. The 'Bonus Disc' here, featuring other takes on some of the album tunes, as well as other material, actually sounds superior, more like a passable rehearsal mix, although it's undeniably just as dated as the album disc.

I wanted to get that negativity out of the way, because if you acclimate yourself to what exactly this release is, a window into something so culturally obscure to us modern metal dweebs, Heaven and Earth has a really cool style and the potential to be so much more. It's more or less a mesh of hard rock and heavy metal, with some forays into doomier riffs, and a prog injection in how a lot of the synthesizers are implemented. There are definitely times that I think the music here would appeal to fans of anything from King Diamond/Mercyful Fate or Rainbow to Paul Chain and Black Hole, although some of the later demo material on the Bonus Disc almost forms a crude form of screaming, Priest-like power metal. It can be creepy, it can be inventive, or it can just start rocking out. There are certainly places in which the band is a little too rough around the edges, some of the vocals and some of the more frenzied guitar riffs, but I feel that if a large amount of money had been thrown at this group and they had been able to lay this all down with a great producer/engineer, Heaven and Earth would certainly have been an album more folks remembered, with the sort of imaginative atmosphere about it that would still hold up today.

Yes, the primitive nature of the recording could be a deal breaker for many who don't usually ply the waters of raw 80s recordings like demos or rehearsals, and it was an obstacle even for me, but as someone who had never actually heard the album before, I was pretty impressed by the vision that went into it, and that someone cares enough to release this and give a wider audience a chance to experience what was, what might have been...heck, what might STILL be, because the band has never seemed to fully dissolve, drifting in and out of existence over the decades. If this serves as a window to what they could pull off 32 years ago, who knows what the 21st century version could pull off?