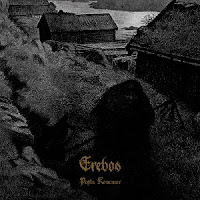 Pesta kommer's biggest obstacle is that it's a very cool black metal record entangled with an entirely mediocre dungeon synth album. Its second biggest obstacle is that those lush, beautiful melodic black metal components lack vocals to embellish them...not that this is a complete dealbreaker, mind you, but you can't help but to think that an entire album with the memorable qualities of the opening title track, laden in atmospheric rasps, would really have driven this one to the phenomenon level. So desperate and catchy are those guitar riffs that they deserve a little bit more than what they're served up alongside here, and it's a shame the sole musician behind this project didn't feel the same.

Now, don't mistake me, not all the synthesizer parts are a bust. Where they flow to and from the metal parts they are actually quite nice. When they aim for a more militant atmosphere, as in the second tune, they are also pretty passable. But several of them fizzle out with exceedingly repetitious key lines, fit to their genre, but nothing that you haven't heard or that you'll really want to listen through much afterwards. It lacks the creepy medieval tones and ambiance of a lot of the classics in that field, and brings relatively little to the table other than sounding like incidental music from a B-grade video game or historical TV show. Once the music stirs back into those emotional, bleeding tremolo picked guitar lines, which are just so richly executed over the drums and chords, you'll wish that the album featured far more of them, rather than leaving some tracks void of them.

Production is overall very good, on either stylistic end, but once more the metal really shines above its pure synthesized counterpart due to the layering of the guitars. The absence of vocals might not actually prove so bad for some, I just think that it doesn't reach the maximum impact it might have, despite its inherent excellence. A tragedy, because a half dozen songs that good, maybe interspersed with some more formidable, memorable synthesizer segues would be all the rage with fans into groups like Summoning, Druadan Forest, Eldamar, and Caladan Brood, while an album with the quality black metal alone would make ripples with the atmospheric, nature-themed black metal audience.