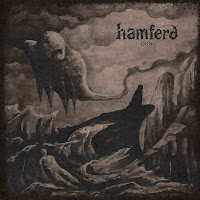 The Faroe Islands fascinate me not only as a little nook of the world that I hadn't heard of growing up, but also as a place where a small but curious metal scene has sprouted, possessing a lot of variation within itself, but also some unique sounds when compared the world over. Of course I'm largely talking about Týr, whose Viking progressive metal is extremely distinct, but in this case I'll dredge up the atmospheric, oppressive Hamferð who really thrive in a niche between traditional Gothic/doom metal and something more otherworldly, perhaps like older Tiamat and Lake of Tears. I came a little late to this sextet's sophomore full-length, Támsins likam, but really enjoyed that when I got around to it, and this two track live EP, for all its format limitations, is phenomenal...

And there's an interesting story behind it. While the first, and newer title track was recorded live and filmed in Tórshavn, the second, "Deyðir varðar", a shorter version of a track of their full-length debut Evst from 2013, was recorded out of doors during a solar eclipse. Maybe a bit tacky, but when you watch the live videos of the performances (both available on the 'Tube'), you can see that this was done out of conviction and not just some soulless gimmick. Now the two cuts here are not cut from the same cloth; "Ódn" itself is by far my favorite of the two, and best fits the description I offered above, an 8 minute crawl of monolithic, measured pacing with gloomy power chords, and a mix of vocals between a potent guttural, wavering cleans mildly reminiscent of Candlemass, and then a style in between, a passionate, melodic howling which is more like a beefed up version of Primordial frontman Nemtheanga. Lean into this with some atmospheric organs that ride just at the edge of the chords' weight, and you've got a powerful statement that delivers more than a lot in its genre can muster in an actual studio.

The 'B-side' track is a calmer piece with cleaner acoustics and vocals, still quite great and folksy, but doesn't offer that same level of power if it still resonates emotionally. Again, the production is near pristine, you wouldn't know that these were live without a few minor details, and paired up with the stark, simplistic cover painting this is just one that will stick with you, or at least have you tracking down their older material which is very much worth it. While you'll find plenty of the band's DNA has been drawn from its primary genres, there just isn't an another band that sounds to me quite like this one, putting together these strands in this precise way, and they're another Faroe standout. As for the 12" as a product, I don't know if this band's style really jives with the format. Once you listen through "Ódn", you're going to want to hear a lot more than 8 minutes of that...and so it seems rather unfulfilling in that respect. So I'd bargain that unless you are collecting all the band's works, you could just check out the video versions of the tunes and invest your money in the full-lengths, past and future. If the second tune had been of the same weight as the first, then I'd ramp up the praise. Having said all that, this is still one of the finer, short live EPs I've come across in awhile, so if my rating seems a bit lowball, it's only because the 'product' doesn't match the musical vision. But the band is awesome.