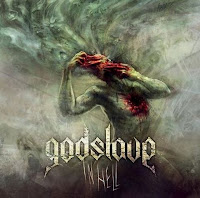 Despite over a decade of existence, five full-length albums and a number of appearances on splits and other recordings, I have not actually listened or really even heard of Godslave before I sat down with this third record, In Hell. There's an obvious reason for that, as the rest of this review will reveal, but I have to say up front that I wanted to get into this. A band clearly rooted in the 80s, with a whole slew of influences that encapsulate a whole lot of the B-list or below of bands making their rounds back then. There's nothing overtly 'goofy' or exceedingly retro about what they write, they take those same influences and thrust them into a 21st century studio production; they are topical, they aren't just some self-flagellating 'thrash' band that wants us all to know just how 'thrash' they are.

So here's the issue...if you took about 20 or more of those thrash bands from the 80s, largely US stuff like Whiplash, Sacred Reich, Testament, Exhorder, and Exodus, but also traces of groups like Artillery, Forbidden, Xentrix, Mortal Sin and Destruction, put them all in a blender, both vocally and musically, and then removed any modicum of memorable riffing and choruses, you would end up with an album like In Hell. This is appreciably competent stuff, from both the dynamic range of the rhythm and lead guitars, the flexibility of the vocals, and the clarity of production, but so little of it really registers to a thrasher that has been there all along. It occasionally lapses into some really baseline Exodus neck-jerking riffs, but often has a bit more complexity to it, and normally the amount of effort put into something like that draws my attention, but the numerous times I spun the material I just found it sticking even less on each successive listen. None of the vocal styles are bad, you get a smattering of Phil Rind, Zetro, Chuck Billy, Chris Astley and even some Schmier sneering, but despite the chameleon-like scope they don't exactly develop a personality on their own.

The Germans also know how to put a track together with a richly busy, slick bridge section, some leads that feel like time was spent on them, and some nice atmosphere to the intros and how they progress into their verses, but it seems like a puzzle in which not all of the pieces were slid fully to where they belong. Certain re-sequencing of note patterns could have turned this into an absolute smasher of a 21st century thrash disc that looks both backward and forward at the same time. I mean, granted, when you look at this it seems more like some melodeath or metalcore disc with the band's logo and title font, so I was kind of surprised that the guys were so well practiced in a whole range of older bands that informed their style, but the music overall really just can't hurdle past respectable tribute to a whole era into something worthwhile on its own. Clearly Godslave have their shit in order organizationally, but this set of tunes is just not so inspired beyond the format itself. Quite possible that their other works are superior, but I'm not sure who is paying attention.