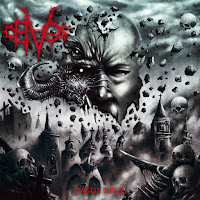 Long one of the more dependable second tier acts on the Polish death metal circuit, Deivos have now been in existence for over 20 years with no end in sight. Now, when I refer to them as 'second tier', I refer only to popularity, because if I'm being honest these guys are every bit an equal to many of the better known, veteran bands from the States or elsewhere, and Casus Belli is nothing nearing a letdown if you've been following them since their more transitional works like 2010's Gospel of Maggots. Like a number of bands on their scene, Deivos exist in a happy medium between the more brutal and technical death metal acts and those who follow the songwriting aesthetics of the late 80s and early 90s, although they don't quite subscribe to the more creepy, old school tremolo picking vibes or Swedish guitar tones and d-beat rhythms so eminent in this domain.

Basically it's as if they were a parallel evolution to what the New York death metal crews like an Immolation or Suffocation were doing in the earlier 90s, but extremely well balanced in terms of composition and dynamics. Loads of bludgeoning palm muted rhythms fired off at a number of clips both moderate and hyperspeed, but the band is never afraid to slow down for a few dreary, doomed passages where the chords are given more space to breathe. The footwork on the drums is intense, a lot of double kick and blast beats effortlessly wrought to carry along the frenzied guitars, and the guy uses his full kit, lots of skilled fills and higher pitched percussion to match the thunder. They splatter quality little lead guitars all over the place that help maintain a level of variation, balance and atmosphere that might be lost if they were simply charging forward in their battering rhythms to fill out every second of space on the disc. While the rhythms aren't extremely technical, they're just busy enough and non-generic enough that they keep your attention while they are clobbering away, and then the band will shift into some morbid chords that ramp up the evil.

The vocals are pretty straightforward as they always have been, syncopated gutturals that match in very well with the drumming and chugging, but still pretty sincere and gruesome if you actually listen to them closely. What surprised me were a few groovy little riffs (as in "Victims") which reminded me of vintage efforts from their countrymen Decapitated, you know, from back when that band was really good and had something inspiring going. In every vortex of blasting and pummeling across this entire album there is usually one or two sections waiting in the depths that will ramp up the catchy and thus make all the aggression surrounding them more impressive on the whole. Casus Belli is certainly one of the stronger efforts they've put out alongside Gospel of Maggots and Demiurge of the Void, and further cements the band's legacy of consistency...outside of the giants like Vader and Behemoth, you'll only find a few on the Polish scene that could throw down with  Deivos on an album to album basis. So if you're into Lost Soul, Calm Hatchery, or Decapitated and have somehow missed out, make the correction!