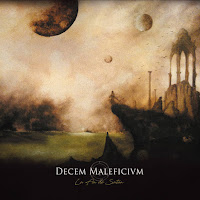 Here's an interesting six-piece out of Santiago, Chile which has been around nearly 20 years, but that I've not had the pleasure to encounter on a previous occasion. I generally associate their country's metal scene with an eclectic mix of doomier groups and blackened/thrashers, so Decem Maleficium stands out a little for doing something different. Certainly the Gothic chants, layout and melancholic nature of the music tend towards the former, but to be honest these guys have more of a pure black metal core weaving influences from the Greek and Scandinavian scenes and then dressing those up with eerier elements that wouldn't be out of place if they were playing a more purely doom focus. They also have the capacity to throw me for a few loops here or there that maintain a certain vitality and freshness to their songwriting.

Just as examples in the first time, the proggy, sparse synth lines that occasionally arrive over "The Ceremony", or the atmospheric, even New Age jazzy segments you'll find buried deeper into its back-end, perforated with spicy little shredding lead guitars. La fin de Satán is not going to be perfect in all ways for all people, but it's certainly adventurous, from these aforementioned elements, to the more urgent, operatic synths they'll lay out behind certain black metal passages, the tribal drumming on some sections, the multi-tiered vocal styles which merge together some death-growls with cleaner crooning, and even the solemn acoustic breaks. There might be some room for improvement in a lot of these areas individually, but the fact that they plotted this all out to begin with is impressive all on its own, and immediately created a uniqueness out of a lot of familiar components. The musicianship is all-around tight, especially the drums and lead guitars, and while the tremolo picked rhythm guitars that make up a lot of the structure aren't wholly unique sounding, they bend and explore enough ground that they are spitting out satisfying riffs more often than not.

There really isn't a standout weak point on the album anywhere, other than perhaps that its overall impact is limited. It's not super memorable, just good. The rasp vocals aren't terribly interesting I suppose, but they're not bad and they are well enough placed to match the intensity of the faster riffing. However, despite having such a good range of ingredients to work with, I never thought that La fin de Satán was biting off more than it could chew. Some listeners might not be into the synth tones, they do seem a little sillier than what is happening around them, but I thought they brought a mildly psychedelic charm to the darkness and evil on exhibition throughout much of the compositions. If you're looking for a band which takes its primary genre and then tinkers a little at its boundaries, or you dig expansive, occult black metal which isn't afraid to mix up its instrumentation or try some new rhythms and flavors, then this is an effort I'd happily steer you towards.