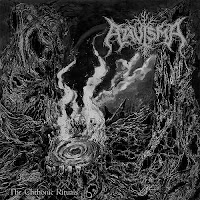 How many death metal records have you heard lately that begin with about a minute of crazy drum soloing? An uncommon strategy, but sure enough one employed by Frenchmen Atavisma on their Memento Mori debut album The Chthonic Rituals. Here's a record which does fall largely into the cavernous territory, with walls of claustrophobic, fleshy guitars that give the listener the impression he or she has been devoured by some abomination deep within the Earth and thrashing about to escape imminent suffocation. So, in other words, if you've been following the genre's trends for the last decade and change, or find yourself poring over the rosters of labels like Dark Descent, this album might be a given provided you are not already taxed beyond the attention span for the niche.

Incantation is the natural reference point, as it is for so many similar groups, but the saturation on the guitars here definitely has a more European vibe, raw and semi-Swedish without the band ever bordering on Entombed/Dismember worship. And I love the rawness here, how they'll leave some of the feedback in the mix to make it sound dank and evil, yet the production itself on the whole album is quite fulfilling, deep and dark but clear enough that nothing gets lost in the mix. The guitars roil and rend as they carve up a standard but effective slew of note patterns, and they ably blend the more blasted material with some slower, death/doom passages that they ingrain with melodies which instantly stand forth from the clobbering morass surrounding them. The drums are great, as you'll already know from that intro track, energetic and busy without any level of overproduction, and they give even the less interesting rhythm guitars a lot more pep to them. The strongest points of the Rituals for me are when they burst out into some hyper tremolo pattern where a lead-like melody emerges and get a little more atmospheric and extradimensional than when they're just gorging on the grindier rhythm guitars full-bore.

The vocals are fine if you're into the subterranean Craig Pillard style of nihilistic guttural, although I think that I've heard so many of this types of front man the last 10-15 years that they all sort of blend together, and certainly Atavisma is no exception in that regard, but they do get off some huge, ominous sustained growls and roars over some of the more chaotic points in the music, and I think anyone who's a real die hard for the style isn't going to have any problem with them. They're also often referred to as a death/doom hybrid, and I can certainly hear that in places like the end of "Invocation of Archaic Deities", or the trudging "Monoliths", just expect that some tracks are far more on one side of that spectrum than the other. All told, The Cthhonic Rituals is a worthy listen for fans into Dead Congregation, Father Befouled, Funebrarum, Ossuarium, and bands of that ilk.