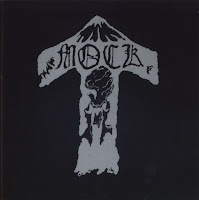 Mock was essentially the predecessor to the longstanding Norse black metallers Kampfar, active through the early to mid 90s and releasing a demo (Cold Winter) and EP (Vinterlandet), both of which are collected for this compilation CD that Agonia Records dropped in 2007. I'm always interested in delving back into a band's backstory and seeing where its roots lies, especially one I enjoy, as I have through much of Kampfar's existence, so I was surprised to hear that the progression from this material flows quite naturally into where they were at when they the original Kampfar EP later on in 1996. That's not to say that there wasn't also a significant amount of progression in quality, because the Mock material is as simplistic as you might imagine from crude black metallers of olde.

It's also pretty poorly produced. Audible, but the levels are all borked to shit. Guitars are insanely minimalistic, but the loudest instrument, with an obvious Hellhammer influence that gleans through each series of brute chords blurted out. Once in awhile, they'll also hit a pretty evil groove, and that's a highlight of the material, but many of the riffs are just swollen sounding, primitive and boring. It's worse because the drums are quite cleanly produced, and lack the power to really contain that burly, raw guitar tone, and the rasped vocals often feel like weak whispers by comparison, while the bass just follows along to make that guitar even fatter sounding. The difference between something like this and Hellhammer is you can occasionally get a little Viking melody or something that shows these blokes were about to embark upon the Scandinavian path, and certain tunes like "Her af Vikingum, Black" are already boarding the longship, clear indicators of where Kampfar would get their own start, and the chord progressions are often 'warmer' in feel than evil or hostile. I'd also point out that on that particular track the bass is much more interesting, but that's ruined with a lame fade off that does the tune little service.

Once you move on to the EP's material, it's instantly more washed out and atmospheric, with some spoken word narrative and clean guitars set against the distant chords of the electric rhythms. This stuff is much more evenly produced and to be honest I rather enjoyed the three Vinterlandet songs, far more than the demo material. The vocals are more powerful, the use of the rhythms are certainly to be counted as another influence on how a lot of the Viking-themed black metal bands would travel, the keys are a decent, non-intrusive complement, and the whole deal just seems more potent, wintry and nasty. Unfortunately, these are balanced off with that humble, mediocre demo and aren't presented first on the collection, and the playtime is less, so it feels like you're getting a history lesson that doubles as an obstacle before anything you can truly enjoy. Obviously I think Kampfar is a major step ahead of Mock, but if you're a big fan of Norse, Blood Fire Death, Graveland or Enslaved's Frost then you might really dig the Vinterlandet material.