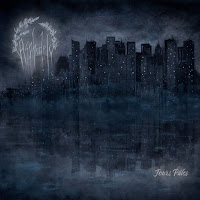 It's a complete surprise to me that such a new band can come up with such a consistent and compelling vision for its music in such a short time, and while a good many might turn up their noses at the 'post-black metal' tag that France's Asphodèle clearly belongs under, they do a really decent job at covering the bases and standing out for that particular style. Just looking upon the lush, hazy cityscape of the album cover, you can kind of get an idea of what this sounds like...urban, personal, and highly melancholic, like French cinema, cool and hip as you pass it in the park on a dim evening, with a cigarette callously hanging from its lips. Alright, I'm being a dramatic asshole with some stereotypical notions of this band's culture, but I didn't actually mean that in a bad way. It's the occasional despondency, the lack of interest in Audrey Sylvain's vocal contribution, and the glorious devotion to the driving, textured, somber riffs that make Jours pâles such a strong debut.

Yes, Audrey is involved here, and I suppose the obvious comparisons for the band's sound is straight to Alcest or Amesoeurs, and those wouldn't be far from the truth, but the material here is a little more brooding. The riffs are strong, mid-paced with a lot of chord patterns or melodies ingrained in them that remind me of groups like Katatonia, On Thorns I Lay and other bands of that style, in addition to many of the group's better known post-black peers. There are some instances where they pick up to a more roiling pace, but even then the mood is affected by the tiny slices of piano and the melodies that erupt in any corner of the album like flowers suddenly sprouting from a plot of city soil. I was also reminded of the Swedes Lifelover, especially their album Konkurs, especially when they spit out the harsher male vocals or the angst-ridden cleans, but here it's all performed a little tighter. Audrey's vocals work really well here, not always structured to match the pace of the music but sometimes delivered in a more fast-paced spoken word narrative, or even a flightier, happier sense; in any case, a good reflection of the urban sadness so intrinsically wrought throughout the record.

The beats are solid rock rhythms which occasionally get a little more splashy and intense, and the bass is quite a simple anchor to the rest, standing out a little more on the tune "Nitide" which has more of an eerie shoegaze vibe than its neighbors. All told, Jours pâles has a very high production level, all the instruments clear and set at appropriate levels to drift along the sinuous streets. The vocals are excellent, always full of emotion, especially on a track like "Refuge" where the grimier rasping is allowed to reign for a spell. The synths and pianos are tasteful and never overused. There's enough rhythmic variation to keep the listener in check throughout the entire track list, although stylistically much of the material moves at a similar pace and with consistent rocking chords that push them along. It's not always as catchy as it might like, but this is nonetheless a solid debut if you're into Heretoir, Deafheaven, Myrkur, Alcest, etc.