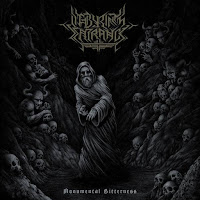 Labyrinth Entrance is a solo project from a member of Poland's Stillborn, and for a one-man act it's got a high level of polish and production values that you don't simply associate with your stock bedroom or basement black metal act. Monumental Bitterness is split into six cantos, the first of which is a brief, ambient intro that seems to set up the band's namesake as it cedes into broad, patient, minimalist guitar elements and bass plucks that then assemble into the heaviness proper, which as it turns out, continues along a more slow to moderately paced course throughout most of its run time. I could dub this a Polish spin on the slower, glorious aesthetics that were prevalent in the original Greek BM scene, only with a darker mood about it that is split up only with brief strings of starlight.

A lot of the album could be characterized as blackened doom as it really clings to its moderate speeds, and this really allows each of the riffs to be fully felt in the listener's gut, but the riff set itself is quite broad, from eerie, winding dissonant riffs to more accessible chord patterns and captivating melodies that manage not to ever come off too sugary or positive. Vocals range from the expected harsh barks, to cleaner chants, even some effects-driven vocals that sound robotic in "Canto I", or murky subterranean echoes ("Canto III"). The riffs often devolve into patterns of frightening, droning ambiance ("Canto II"), which quite coolly set up the further metallic elements. Overall, the musician known here as Hunger does an impressive job of varying up his content so the 6-8 minute tracks have a lot of nuance to them and never become sprawling monuments to boredom. The project continues to live up to its brand as you can never be quite sure what will be lying around any of its corners, so you're best to keep 40 minutes of string handy as you explore its depths.

It's not all a crawl, as the closing piece hammers down some moderate blast beats, but even then you never get the sense that Monumental Bitterness is ever concerned with its velocity as it much as it is fleshing out every moment with appropriately bleak atmosphere. The focus here is ever on the guitars and vocals, the rhythm section has its moments, but is primarily a more mechanical bedrock to support the album's more creative ideas; the few exceptions are when the drum work gets more tribal and thunderous, providing for some of its better beats. Overall though I have few gripes, while there aren't a lot of truly memorable riff patterns or vocal lines, the material as a whole congeals into a moderately gripping experience, a subversion of slower to medium black metal much like Stillborn is a bit out in left field for the more intense death/black assault. Struggling a little to find comparable bands to this, but I think if you enjoyed the most recent pair of albums from Norway's Svartelder then you'd want to check it out, or the more modern Varathron stuff like Untrodden Corridors of Hades and Patriarchs of Evil.

Posted by autothrall at 7:55 PM