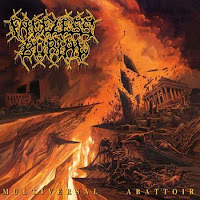 Multiversal Abbatoir is one of those releases that ironically suffers from having such a strong opening piece, in this case the creepy and haunting, brief acoustic piece "Sluiced in Celestial Sewerage", just under two minutes, which is in my estimation better than all of the actual death metal tracks that comprise the rest of the EP. However, that's not to say the band's harder material is bad at all, it's indeed solid, it just lacks the potential that a return to such atmospherics might have lent it, and it's a cautionary warning, when kicking off your recording with something so starkly different, be prepared that you might be dealing in some degree of disappointment. It's a self set snare, but one that Faceless Burial don't fall in quite so much as a few other death and black metal bands I've come across.

Other than that, though, these Australians prove themselves a competent old school mashup of sounds you might recall from the Floridian scene, perhaps with a bit of the earlier Dutch masters, bands from Death and Obituary to Asphyx and Sinister, with a little Malevolent Creation and Morbid Angel mixed in for good measure. The guitars are chunky and clunky, cycling between clinical, evil harmonized riffs, fleshier low end grooves that almost remind me of a more jazzy and experimental, broken Blessed Are the Sick, with a dash of Gorguts' late 90s metamorphosis. They cram quite a lot into each tune in term of tectonic tempo shifting, living up to the cataclysmic cover artwork, and they keep the listener on the edge of his or her seat, straddling the abyss of their infernal creation. That's not to say they write all the best riffs, a lot of these will prove minor variations on others that you've heard many time, but they inject a lot of controlled chaos in how they pattern them out which at least keeps you interested since there's no chance they're going to repeat themselves unto oblivion...dynamism is the key to the compositions' effectiveness.

With the sturdy, but natural drumming, thick pummeling rhythmic underbelly and dour, sustained growls, I quite dug listening through tunes like "Piteous Sepulchre (of Amentia)" and "Fistulated Beyond Recognition", although again they don't pack in a lot of breakout riffs, just a lot that sound cool when they're crashing into one another. Overall, though they don't really offer that same blend of dynamic death and doom, I'd liken Faceless Burial to their countrymen Disentomb in how they never lapse into an excess of formulaic writing. This EP, despite its shorter length, keeps churning and blasting you in the face repeatedly so you feel as if you've just witnessed some seismic rupture of the Earth beneath you, magma licking at your chin and paranoia taking over that everyone and everything you love is about to be swallowed up into the crust, and a lot of the wild lead guitars are so hit or miss that it only snowballs the chaos. So while I really would have liked a few returns to those wicked, excellent acoustics to round this all out as an experience, this still gets my seal of approval as something in which the creators have expended some effort to keep you guessing and keep you terrified.